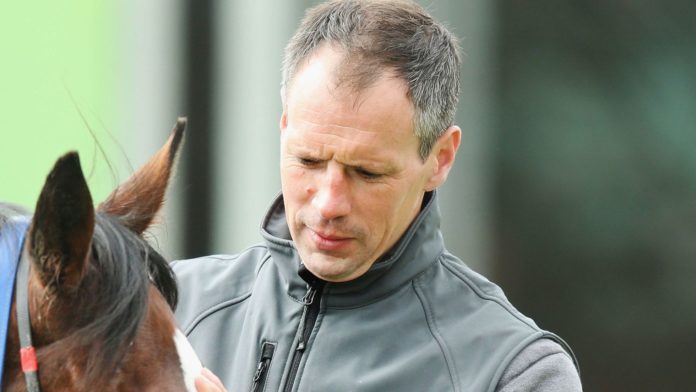 Iain Jardine reports Lomu to be fine shape as the six-year-old goes for the hat-trick in the Betway Conditions Stakes at Newcastle on Wednesday.

The Dandy Man gelding broke the five-furlong track record at Wolverhampton on his first start for the Carrutherstown handler early last month, and doubled up over the same course and distance when overcoming trouble in running to beat Royal Birth by a length.

This will be a tougher test for Lomu, in a fast-track qualifier for All-Weather Championship Finals Day at Lingfield on Good Friday.

“Lomu is in tremendous form at the moment and seems to be on the improve,” said Jardine.

“He won well at Wolverhampton the last day, having broken the track record there the time before.

“I suppose there have been some fast horses around there in the past, so to go and do that was pretty impressive.

“I think he relies on a strong pace to aim at, which you are generally guaranteed in a five-furlong race.

“Wednesday is obviously tougher and he will be wrong at the weights with a few of them, but he is going the right way which can be important in races like this.

“I think he is capable of running a big race and it would be great if we could get him to Lingfield on Good Friday. There is great prize-money on offer and I suppose Wednesday will tell us more in that respect.”

Hareem Queen is the only filly in the field and has chalked up two wins and a second in three runs at Southwell since returning from a 173-day absence.

Her trainer Karl Burke has his fingers crossed the daughter of Dark Angel can transfer that ability to the surface at Newcastle.

“She’s in great form. Obviously she handles Southwell very well. I think we bumped into a good horse (Tawny Port) there last time,” he said.

“I think it was an improved performance on her previous wins. The time was quick and she was carrying more weight.

“She goes there in great spirits, so we’re hoping she can be as effective on the Tapeta.”

Corinthia Knight, winner of the all-weather sprint final in 2018, is among the seven declarations.

Another Touch has hit a purple patch with victories Chelmsford and Lingfield, and goes for his trio in the other fast-track qualifier on the card, the Bombardier Golden Beer Conditions Stakes.

Trainer Richard Fahey said: “Another Touch is in good order and is due to go up in the ratings to 101, so we thought this was worth a go and we will see what happens.

“To be honest, Another Touch had a little issue when he came back from Dubai and he is just getting his confidence back now.

“The horse at the bottom Via Serendipity is the one to beat on ratings, but we are happy with our fella and he must have some sort of chance.”

Raydiance returned to winning ways at Southwell recently – but that was over seven furlongs and Burke is not sure if the mile will suit.

“He’s a Mayson and they love that deep surface at Southwell, but he has got a bit of handicap form at Newcastle,” said the North Yorkshire trainer.

“Whether that’s good enough and whether he’s as good over the mile, we’ll see, but he’s in good form. There’s nothing to go back to Southwell for until the end of February, so we thought we’d take our chance.”

Via Serendipity, Home Before Dusk and Trevithick complete the list of five runners.