Home World Why is Puerto Rico Being Struck by Earthquakes?

Since Monday, Puerto Rico has been struck by multiple magnitude 5 and 6 earthquakes. These earthquakes caused significant damage on an island still recovering from the devastation of Hurricane Maria in 2017.

Most people don’t think of the Caribbean as an area rife for geologic activity, but earthquakes and eruptions are common. The major earthquakes in Puerto Rico and Haiti, as well as eruptions on Montserrat are all reminders that complex interactions between tectonic plates lie along the Caribbean Ocean’s margins.

The Caribbean plate lies beneath much of the ocean of the same name (see below). It is bounded in the north and east by the North American plate, to the south by the South American plate and to the west by the Cocos plate. There isn’t much land mass above sea level on the plate beyond the islands that stretch from southern Cuba to the Lesser Antilles, along with parts of Central America like Costa Rica and Panama. A few small platelets have been identified along the margins of the plate as well. 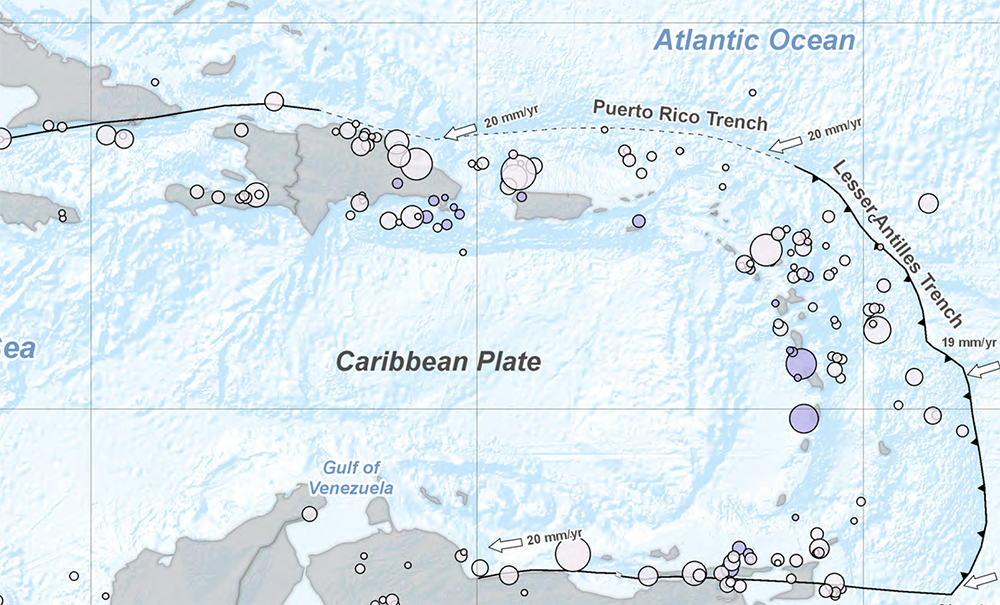 Tectonic plates in the eastern Caribbean with historical earthquakes from 1900-2016 marked. Source: USGS.

The northern edge of the plate is a transform boundary, where the two plates are sliding by each other. This causes stress that leads to earthquakes, much the same as the earthquakes generated along the San Andreas fault in California. This is why we’ve seen large earthquakes in places like Haiti, the Dominican Republic and now Puerto Rico.

Head to the east and you reach the curving arc of islands that form the Lesser Antilles. Many of these islands are homes to potentially active volcanoes, such as Soufrière Hills on Montserrat, Pelée on Martinique, La Soufrière on St. Vincent and more. Other islands are homes to relict volcanoes as well. All these volcanoes have been formed by the North American plate sliding underneath the Caribbean, similar to the Cascade Range in the western United States and Canada.

So, Puerto Rico doesn’t have active volcanoes, but it can experience large earthquakes. One of the most famous in the 1918 San Fermín earthquake that was a magnitude 7.1. Unlike the current temblors, the San Fermín earthquake occurred north of the island under the sea, generating a tsunami. More than 100 people likely died in that event.

The current spate of earthquakes struck near the southern coast of the island. Both of the largest earthquakes — Monday’s M5.8 and Tuesday’s M6.4 — occurred during the early morning hours, when most people are at home. This heightens the risk of injuries and fatalities if homes collapse, but luckily so far the number of deaths is low. However, there has been significant damage to home and infrastructure already made precarious by the devastation of Hurricane Maria. This means longer-term hazards for the people of Puerto Rico.

On top of this, the earthquakes have triggered landslides and rockfalls, increasing the threat to the island’s residents. The shaking also destroyed a picturesque natural bridge on the coast of the island. With dozens of aftershocks so far, it may be quite some time before people feel secure again.