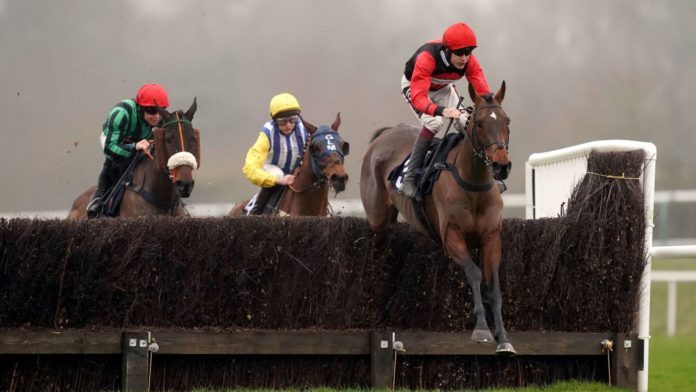 Anthony Honeyball can begin to dream big after Sam Brown left his injury problems behind to make a winning debut over fences on his first start in 750 days at Lingfield.

Not sighted since a successful hurdling bow at Plumpton more than two years ago, the eight-year-old gelding showed his ability remained intact when outclassing his rivals in the Follow At The Races On Twitter Novices’ Chase.

Making just one error at the 14th obstacle, the 6-5 favourite put in an otherwise near foot-perfect round of jumping before coasting to a 22-length victory from Just Your Type, to complete a double for jockey Aidan Coleman.

Honeyball, speaking from Taunton, said: “He jumped absolutely beautifully, although he did make one blunder and I did think he was on the floor, but he stood up and within 50 yards he was going as well as before.

“He was going into it a fit horse, but he is not a difficult horse to get fit, it is just about keeping him sound. He was ready to run in October/November time this season, but then he fell apart on us and within weeks of running him last season he got injured.

“The last fortnight he has blossomed and I was pretty happy with him going there. I know this is only a small stepping stone, but I’m delighted he has run so well.”

He added: “Soft ground is key to his chances. I was half-thinking if he won today that he might go to the Reynoldstown. If the ground was like it was for the last meeting at Ascot, that is the sort of race I would like to run him in.”

Illegal Model (16-1) hit the ground running on his first start for Charlie Longsdon when making light work of the testing conditions to get the ball rolling for Coleman in the Watch Sky Sports Racing In HD Novices’ Hurdle.

Longsdon said: “I’ve only had him a month. The horse that was second in his point-to-point (Mahler Allstar) finished third in the Leopardstown bumper over Christmas.

“He might be very ground dependent and first things first – we will try to find a similar race on very soft ground.”

I Hope Star landed something of a gamble having been backed in from 33-1 overnight into 8-1 when claiming the Visit attheraces.com Standard Open National Hunt Flat Race by two and a quarter lengths.

Winning trainer Neil King was among those on at a big price and said: “He has been finding life very easy at home and you had to fancy him. He has been delighting us at home, so at 33-1 you had to get on.

“Every little bit of work we have stepped him up in, he has answered. He will improve on the back of this.”

Bridle Loanan (6-1) shed his maiden tag at the sixth time of asking with a staying-on eight-length victory in the Sky Sports Racing On Sky 415 Novices’ Handicap Chase.

Trainer Gary Moore said: “He has just about gone in the ground today and I hope he will be better on better ground. He settled lovely in front.

“I thought he had a tremendous chance if everything went right, and it did.”