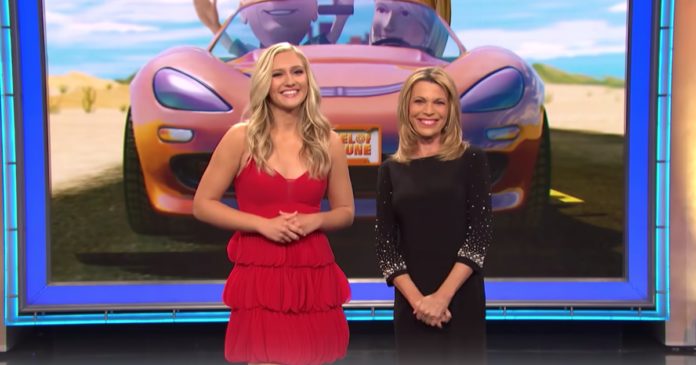 If Vanna White is hosting “Wheel of Fortune,” who will turn the letters? It was the question on everyone’s mind after it was announced that White would be filling in after the game show’s longtime host Pat Sajak underwent emergency surgery.

On Monday, this week’s guest letter-turner, who will take over for White while she’s hosting, was revealed: Sajak’s 25-year-old daughter, Maggie.

“As you just heard, Pat will be back next week. In the meantime, I’m happy to fill in,” White said at the top of Monday’s show. “But, you know, I could do this even better, hosting the show with a Sajak. Everyone, please welcome Pat’s daughter, Maggie Sajak.”

The younger Sajak took the stage and revealed that it was not her first time on the show. She had visited her dad during a taping in 1996, when she was just a toddler.

“I’m walking a little better now and hopefully I’m a little more eloquent than last time,” Maggie Sajak joked after a clip of that childhood visit was played.

Her dad, who has hosted the game show since 1981, underwent an emergency surgery to fix a blocked intestine in November. “From the perspective of his daughter, it was a scary experience, I’m not going to lie. But he’s doing great, and I know he’s so excited to be back next week,” she said.

Taping was paused on the day of Sajak’s surgery, but picked up the following day with White taking over hosting duties. Shows are taped in advance, so the episodes with White hosting began airing in December.

“It’s a bit confusing, but here’s the deal: Vanna will be hosting this coming week and the next,” Sajak explained in a December 7 tweet. “Then two weeks of shows I taped before my surgery. Then Vanna again the week of Jan. 6 with a special guest at the puzzle board. Then the planets will realign, and it’s back to normal.”

Maggie Sajak is not the only guest letter-turner to join the show while White held down the fort. Both Minnie and Mickey Mouse made appearances during White’s first two weeks as host. While the Disney characters are big names, Maggie Sajak has an impressive resume herself.

In 2013 she confirmed in an interview that she was attending Princeton University. She also started a career as a country singer and has released music on YouTube.