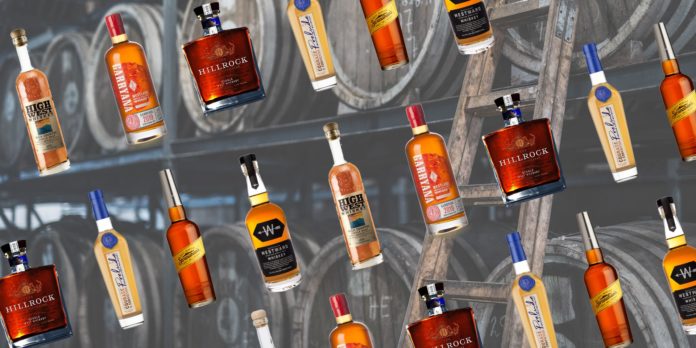 In the whiskey world, opinions are like hangovers: After a few too many, everyone’s got one. Strong stances and hot takes abound about what’s good and what’s bad—whether or not Pappy Van Winkle is actually worth the cost, if brands that are sourcing whiskey are being transparent enough, and how much Bob Dylan really had to do with creating his Heaven’s Door whiskey. The latest hot button topic in whiskey is the growing, but still niche, American single malt category.

American whiskey is pretty strictly defined by the Alcohol and Tobacco Tax and Trade Bureau (TTB), particularly in the bourbon and “straight” whiskey categories, and especially when compared to other countries. In Japan, whiskey can be imported from other countries, blended, and still be called Japanese whisky. In Scotland, caramel coloring can be added. In Canada, a small percentage of other types of spirits can be mixed in. Of course, none of this means that these are bad whiskeys; just the opposite. But there is something to be said for America’s strict rules that many would like to see mirrored in our single malt category.

Because unlike bourbon or straight whiskey, American single malt does not yet have a set of legally defined guidelines. On the one hand, that gives distilleries creative leeway. On the other hand, regulation in American whiskey has proven to be a good way of letting us whiskey drinkers know exactly what’s inside a new bottle.

Utah’s High West Distillery, best known for sourcing and blending rye whiskey and finishing it in various cask types, just launched a new single malt called High Country. (It’s available only in Utah for now, with plans to go national by 2021.) This is notable for two reasons: It is the first whiskey released by High West that was distilled 100 percent in-house, and the whiskey itself was actually made at two separate distilleries—one in Park City and one about 20 miles away. Naturally, some in the whiskey community believe it doesn’t technically count as a single malt. But according to master distiller Brendan Coyle, it’s more important that the whiskey comes from one distilling company, and not necessarily one distilling plant.

“People would tar and feather me for this in Scotland, but we’re more of a single malt in this bottle than a lot of scotch whisky distilleries,” he said. “We have two pot stills. In Scotland, they typically have double distillation. So two pot stills is kind of like one distilling system. Some distilleries in Scotland have three, four different distilling systems under one roof. We have two stills—does it matter that they’re separated by 20 miles under two roofs?”

Well, it does matter to some people. The American Single Malt Whiskey Commission (ASMWC), which was formed in 2016, is pushing for a definition of single malt that hews closely to Scotland’s: 100 percent malted barley, produced entirely in the U.S., and, crucially, “distilled entirely at one distillery.”

Colin Spoelman, co-founder of Brooklyn’s Kings County Distillery, understands High West’s position but ultimately believes the intrinsic meaning of the category should not be diluted. “There is so much misleading in the whiskey space that I feel producers have an ethical obligation to release products that create less confusion, not more,” he said in an email. “A single malt should be the single expression of a single facility. That is what distillers, companies, politicians, and aficionados have fought to protect for a very long time.”

“People would tar and feather me for this in Scotland, but we’re more of a single malt in this bottle than a lot of scotch whiskey distilleries.”

Until this so-called confusion is cleared up, producers are free to label their whiskey as they will, concedes Thomas Mooney, co-founder of Portland, Oregon’s Westward Whiskey (a founding member of the ASMWC). But he hopes that the ASMWC guidelines will be adopted as legally binding rules. “Either way, we’re always excited to see a new or established producer add a malt whiskey to their lineup because it furthers the conversation,” he wrote in an email. “We have come a long way since our team at Westward began distilling American single malt whiskey back in 2004, and we’re delighted to see that American whiskey now means far more than all things bourbon.”

Ultimately, if the TTB rules that American single malt must be distilled at one distillery, which seems likely, High West is prepared. Coyle says it has ample stock and is producing enough new whiskey that future releases would be able to conform to the proposed rules. Overall, he is bullish on the future of the category, even though it might be some time before it attains the respect afforded to scotch or Japanese whisky. “We’re at least ten years away,” he said. “There’s got to be a definition from the TTB, and a lot of things have to happen between now and then. But I can definitely see a world where American single malt competes with the big players on a global scale.”

Until then, here are six American single malts, including High West’s High Country bottling, that are quite good as they are now. Try them all, then pick your side.

High Country is a blend of whiskeys aged between two and nine years, made from three distinct recipes—base malt, tri-malt (base malt, caramel malt, chocolate malt), and peated malt (the youngest whiskey in the blend)—and aged in new charred oak barrels, port casks, and used barrels. That amounts to nine different whiskeys, of which six were blended together for this first batch. Look for chocolate and ripe berry notes on the nose, vanilla and honey on the palate, and just a hint of smoke and some buttered popcorn curling up from underneath.

Stranahan’s is located in Denver, where it makes what it likes to call Rocky Mountain Single Malt. That means that barley and water from the Rockies, according to the distillery, is used in a variety of expressions. These include the original Stranahan’s, a four-year-old whiskey finished in sherry casks, and Snowflake, which is finished in a variety of barrels and released at the distillery every December. Fans even line up outside a week before the release day to get their hands on a bottle of the limited edition whiskey.

This Seattle distillery is using the undefined nature of the American single malt category to create new and innovative whiskeys, while still staying within the parameters that the ASMWC supports. There are three core expressions—American Oak, Peated, and Sherry Wood—along with some limited releases. This fall saw the most recent edition of Garryana 4|1, an intriguing whiskey matured in a variety of casks, including Garry oak, which is native to the Northwest.

Westward is another Pacific Northwest distillery making single malt that’s located in Portland, Oregon. The latest release from the distillery is Westward Oregon Stout Cask, which takes the flagship single malt and finishes it in casks that previously held stout beer from various Oregon breweries, adding some roasted and chocolate notes to the fruity malt palate.

This Virginia distillery blends American single malt with Scottish malt whisky and then finishes it in different types of casks for its Virginia-Highland Whisky. Now it has a new single malt called Prelude: Courage & Conviction, a three-year-old whiskey aged in bourbon, sherry, and cuvée wine casks. As indicated by the name, it serves as a prelude to a whiskey that will be released in the spring, aged for nearly four years with the cuvée component amplified, according to the distillery.

The legendary Dave Pickerell was instrumental in the creation Hillrock Estate Distillery, which makes bourbon, rye, and single malt whiskey in New York’s Hudson Valley. Its whiskey is made using barley grown on the estate that is floor malted on-site, an old-school, labor-intensive process that’s rare in the world of American whiskey. This single malt is initially aged in new charred oak barrels before being finished in ex-Oloroso and Pedro Ximenez sherry casks.