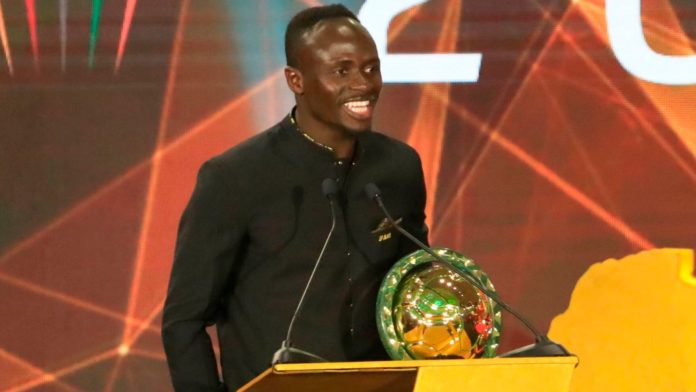 Salah had won the award the previous two years

Liverpool’s Sadio Mane has been named the Confederation of African Football’s (CAF) 2019 African Player of the Year for the first time.

The Senegal forward beat club team-mate Mohamed Salah – who had won the award the previous two years – and 2016 winner Riyad Mahrez to the prize.

“To be honest I would love to be playing football more than speaking in front of many important people,” said Mane when picking up the award in Hurghada, Egypt.

I would love to thank all the Senegalese people. They pushed me. I’m from a very small village, Bambali, I’m sure they are all watching me on TV.

“Football is my job – I love it. I’m really happy and really proud at the same time to win this award.

“I would like to thank my family, especially my uncle who is here today, and my national and Liverpool team-mates, staff, everybody.

“It is a big day for me. I would love to thank all the Senegalese people. They pushed me. I’m from a very small village, Bambali, I’m sure they are all watching me on TV.”

The 27-year-old, who was named in the PFA Team of the Year for a second time, also shared the 2018-19 Premier League Golden Boot with Salah and Pierre-Emerick Aubameyang – all of whom form the front line in the CAF FIFPRO Best XI.

Mane also inspired Senegal into the Africa Cup of Nations final last summer, where they lost to Mahrez’s Algeria 1-0.

That result saw Algeria named the Men’s Team of the Year, with Djamel Belmadi claiming Men’s Coach of the Year.

Barcelona and Nigeria forward Asisat Oshoala was named the African Women’s Player of the Year.