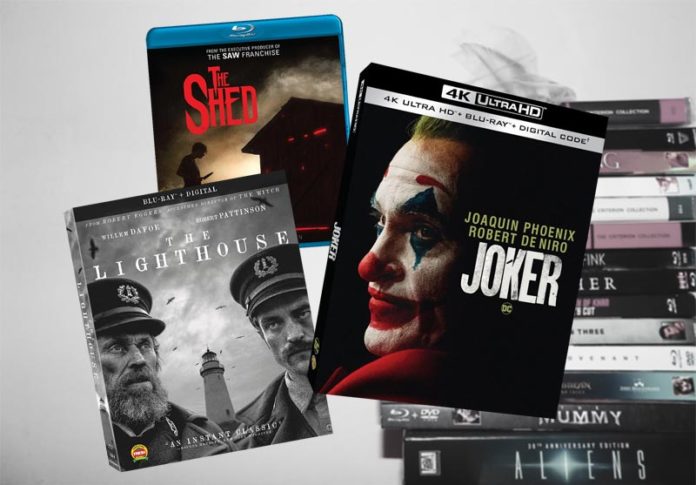 Welcome to ComingSoon.net’s January 7 Blu-ray, Digital HD and DVD column! We’ve highlighted this week’s releases in detailed write-ups of different titles below! Click each highlighted title to purchase through Amazon!

Joker
This film is an original, standalone story. Arthur Fleck (Joaquin Phoenix), a man disregarded by society, is not only a gritty character study, but also a broader cautionary tale.

The Lighthouse
Two lighthouse keepers (Robert Pattinson and Willem Dafoe) fight each other for survival and sanity on a remote and mysterious New England island in the 1890s. From Robert Eggers, the visionary filmmaker behind horror masterpiece ‘The Witch’.

The Shed
When Stan discovers a murderous vampire living in his shed, he knows he must destroy it. But his best friend Dommer has a much more sinister plan.

The Nightshifter
Steñio can talk to the dead. If he isn’t careful, his gift will be a curse.

Wrinkles the Clown (DVD)
It started with an online video that went viral. Wrinkles the clown had been hired by parents to scare their misbehaving child. Follow this eerie real-life character.

Wonder Woman: Warbringer
Diana longs to prove herself to her legendary warrior sisters. But when the opportunity finally comes, she throws away her chance at glory and breaks Amazon law–risking exile–to save a mere mortal. Even worse, Alia Keralis is no ordinary girl and with this single brave act, Diana may have doomed the world.

Brick
A teenage loner pushes his way into the underworld of a high school crime ring to investigate the disappearance of his ex-girlfriend.

The Hellbenders
Screen legend Joseph Cotten stars as the fanatical patriarch of a family of ex-Confederate killers who massacre an army convoy to finance an invasion of the North. But before they can re-ignite the Civil War, they’ll have to smuggle a coffin crammed with stolen cash across a frontier enflamed by lust, violence and extreme vengeance.

Kill Them All and Come Back Alone
In 1864, mercenary Clyde MacKay (Chuck Conners) leads a squad of hard-case cutthroats on a mission for the Confederate high command: Infiltrate an enemy fortress and steal a million dollars in gold from the Union Army.

Cobra Woman
After Ramu discovers that his fiancée Tollea has been kidnapped by a lost tribe and taken to a Pacific isle, he and his friend Kado set out across the seas to find her.

The Sonata (exclusive clip)
A young violinist unravels her long lost father’s past, triggering dark forces that reach beyond her imagination.

Dark Encounter (exclusive clip)
A year after the mysterious disappearance of an 8-year-old girl, we meet her grieving family as they return home from her memorial service in their small town. Later that evening strange lights appear in the nearby forest and the family is exposed to a strange, inexplicable phenomenon that rattles them to the core.

Inherit the Viper
For siblings Kip (Josh Hartnett) and Josie (Margarita Levieva), dealing opioids isn’t just their family business—it’s their only means of survival. When a deal goes fatally wrong, Kip decides he wants out. But Kip’s attempt to escape his family’s legacy ignites a powder keg of violence and betrayal, imperiling Kip, Josie, and their younger brother, Boots (Owen Teague), in this searing crime-thriller that builds to a shattering conclusion.