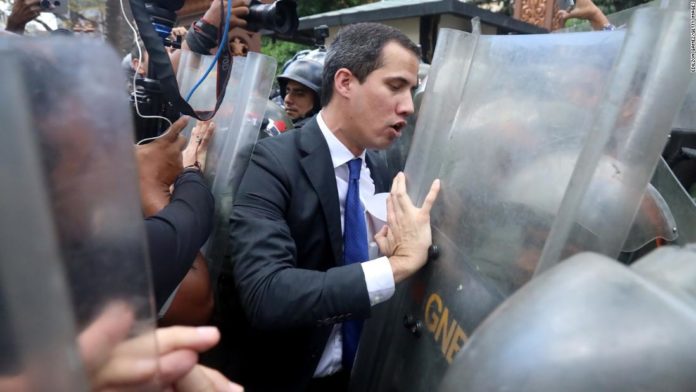 On Tuesday, opposition leader Juan Guaido was briefly blocked from entering Venezuela’s National Assembly building by soldiers in riot gear, before he and a number of fellow opposition lawmakers forced their way in.
The group heaved their weight against the wooden doors of the legislative palace and ran towards the chamber, forcing the few guards inside the palace to give way. Singing the national anthem, they gathered towards the chamber’s podium and swore in Guaido as Venezuela’s interim president — a role he assumed last year after declaring the rule of embattled president Nicolas Maduro illegitimate.
US Secretary of State Mike Pompeo later congratulated Guaido for claiming leadership of the National Assembly and reiterated support for his role as interim president.
“The dictatorship’s oppressive forces did not want to allow us in,” Guaido said after his swearing in. “There are not two oppositions or parliaments, there is only one country.”
There are, however, two rival claims on the top leadership role in the National Assembly, which underpins Guaido’s claim to the presidency.
Over the weekend, both Guaido and a little-known congressman named Luis Parra had been named assembly presidents by separate groups of legislators: On Sunday, a nearly empty parliamentary session conducted by pro-government lawmakers named Parra to the role. Hours later, Guaido was voted in by an “alternative” session of opposition lawmakers who had been barred from the first vote.
The government of embattled president Nicolas Maduro has already recognized Parra. “Donald Trump’s plan for Venezuela didn’t work,” Tania Diaz, a high ranking member of the ruling Socialist party, said on Monday in celebration of Parra’s appointment.
But several other countries, including neighboring Colombia and the US, have expressed alarm over the political process. On Monday, the British government condemned the Maduro regime’s attempt to “forcibly block and frustrate the democratic process of the Venezuelan National Assembly.”
The scuffle has also prompted the concern of United Nations Secretary-General Antonio Guterres, according to UN spokesman Stéphane Dujarric.
In a refraction of the political chaos, violent clashes broke out once the legislative session came to a close on Tuesday.
Pro-government thugs known as “colectivos” in Venezuela attacked journalists and bystanders who were following the events. Armed with sticks and stones and chanting political slogans, they charged on vehicles and pedestrians, breaking several car windows. Police eventually used tear gas to restore order.
Such violence has become common around political events in crisis-stricken Venezuelan. Last year, at least 40 people were killed in less than a month in clashes between protesters, security forces and colectivos.