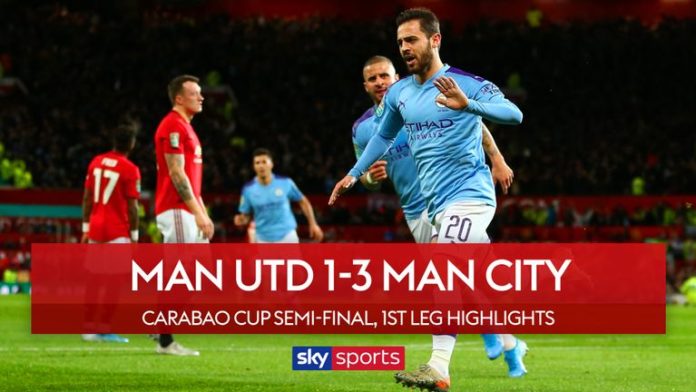 Manchester City took a big step towards the Carabao Cup final with a 3-1 win over Manchester United in the first leg of their semi-final.

Bernardo Silva and Riyad Mahrez set City on their way at Old Trafford, before Andreas Pereira’s own goal put the back-to-back defending champions three up before the break.

Marcus Rashford pulled one back in the second half, but United face a massive uphill battle to get back into the tie at the Etihad Stadium in three weeks. The second leg is live on Sky Sports Football on Wednesday, January 29.

Man of the match: Bernardo Silva

United were the last team to beat Pep Guardiola’s side in the Carabao Cup in 2016, but a repeat result looked unlikely from the moment Bernardo’s stunner put City 1-0 up after 17 minutes. Shown inside from the right onto his left foot, he unleashed an effort from 20 yards that rifled into the top corner. David de Gea was left completely helpless.

Bernardo then turned creator for City’s second after 33 minutes. It was a glorious pass from the midfielder to cut through the United defence, and Mahrez was there to run in behind, before taking a touch past De Gea and slotting the ball into an empty net.

The third after 39 minutes was a little fortunate but no less than City deserved for such a dominant first half. It came from a swift counter as the ball was worked to Kevin De Bruyne in the box. He beat Phil Jones with ease before seeing his shot saved by De Gea, but the rebound hit Pereira a few yards out and ran over the line.

United improved in the second half but lacked any real cohesion in attack, at least until the 70th minute when a loss of possession from Rodri allowed them to counter quickly. Mason Greenwood smartly played Rashford in, and he showed his new clinical edge to get away from Nicolas Otamendi and finish low into the bottom corner.

It was a goal that gave United hope of a comeback, but any potential rally will have to wait until the second leg, as they failed to break through City again.

Manchester United’s Ole Gunnar Solskjaer: “After their first goal, and especially after their second goal, we struggled to get to grips with them. There was a good reaction second half, that was more like it, but the first half until they scored was very there-and-back; no one really dominated, but after they scored, we didn’t cope with that setback well enough.

“We didn’t deal with it [the way Man City played] well enough. We know they can play that way, we’ve seen them do that a few times. I went to see them last year against Chelsea, they played that way and won 5-0 at the Etihad so that’s not a surprise, but they’re good at what they’re doing.

“The first goal, there’s not a lot we can do about that, the second one is a bit sloppy and then the third – we just didn’t recover from those goals. At half-time, we could get into their heads a little bit and we did well in the second half.”

Manchester City’s Pep Guardiola: “In the first minutes it was tight, they had one or two counter-attacks and the second shot. It was an outstanding goal from Bernardo and since then, we played really good with a lot of passes arriving from behind. In the second half, they changed the shape from a diamond to a 4-4-2 and we struggled a little bit, but it’s a good result.

“But it’s not over, it’s Man Utd and we see how they can come back, last season for example against PSG, they score goals and get a good result but hopefully with our fans, we can make a good game and reach the final again.”

Man of the match: Bernardo Silva

“Sensational first and set up the second,” said Alan Smith in the commentary box at Old Trafford. “Everything he did was silky smooth.”

It was a brilliant performance from Bernardo, who showed his quality on multiple occasions in the first half to carve United apart.

Both sides are back in Premier League action this weekend. Manchester United host Norwich on Saturday at 3pm, while Manchester City head to Aston Villa on Super Sunday, live on Sky Sports Premier League from 4pm. Kick-off is at 4.30pm.