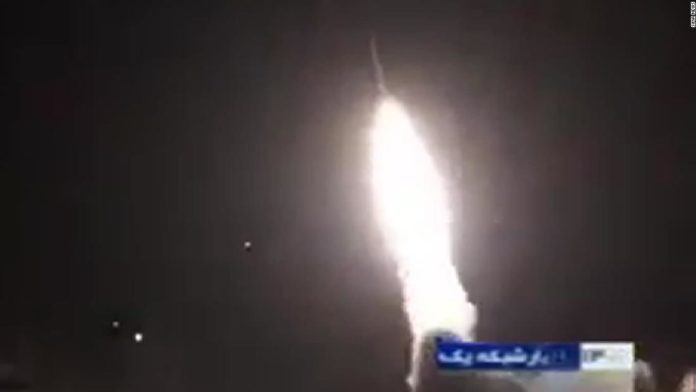 Iran has vowed revenge for the killing of Gen. Qasem Soleimani in a US drone strike in Baghdad on Friday, calling it an “act of war” and “state terrorism.”
In a statement, the Islamic Revolutionary Guards Corps, an elite wing of the Iranian military that is also known as the IRGC, said the attacks were “hard revenge” for the death of Soleimani.
Here’s what you need to know.

Al-Assad base has hosted Trump

The al-Assad air base, which houses US troops, is one of the largest and oldest military bases in Iraq.
It is located in Anbar province, a hotbed of ISIS activity in western Iraq between 2014 and 2017. Anbar was the birthplace of Sunni extremism in the aftermath of the US invasion of Iraq in 2003.
In December 2018, President Donald Trump visited troops at Al Assad. “We came in, we felt very safe coming in. It was a pretty difficult journey in certain ways, but we felt very, very good, very safe,” Trump said, according to a White House transcript.
Vice President Mike Pence visited the base a year later to celebrate Thanksgiving with around 150 service members.

Erbil base is in Kurdistan

The military base in Erbil, also targeted by Iran on Wednesday morning, also houses US troops. It is located in the semi-autonomous Kurdish region of Iraq, run by the Kurdistan Regional Government (KRG), which is a strong ally of the US. The US worked closely with Kurdish Peshmerga fighters in the fight against ISIS.
After Iran fired more than dozen ballistic missiles on Wednesday morning, Iran’s Foreign Minister Javad Zarif said on Twitter the attack was “targeting base from which cowardly armed attack against our citizens & senior officials were launched,” apparently referring to the killing of Soleimani.
It is unclear if the two bases played any role in the US attack.
There were no initial reports of any US casualties in either of the Iranian attacks Wednesday, but an assessment of the impact of the strikes is underway, a US official told CNN.
Iraqi security officials told CNN there were no casualties among Iraqi security forces, after an earlier preliminary report from an Iraqi security source indicated there were Iraqi casualties.

On Sunday, Iraq’s Parliament voted to expel US troops. Iran-backed Shia paramilitaries have repeatedly called for the “immediate withdrawal” of US forces, since the US attack. Over the weekend, they called on Iraqi security forces to keep a distance of at least 1 kilometer (0.6 miles) from US bases, and warned Iraqis about turning into “human shields.”
In Baghdad, Iraqis have been concerned about getting sucked into an escalating proxy war between the US and Iran. Caretaker Prime Minister Adil Abdul Mahdi has said the withdrawal of US troops would be the only “way out” of further violence in Iraq.
On Tuesday, Trump said he intends to pull US troops out of Iraq, but not immediately.
“I think we’ve done a fantastic job, but eventually we want to be able to let Iraq run their own affairs,” Trump said in the Oval Office. “And that’s very important. We want to get out, but this isn’t the right point.”
The US military presence in Iraq has fluctuated greatly since the 2003 invasion. At its height, the US had 170,000 troops in Iraq. In 2011, former President Barack Obama withdrew US forces from the country. In 2014, around 5,000 troops were deployed to Iraq at the request of the Iraqi government who sought US assistance in the fight against ISIS. Troop levels have been roughly the same since.