Home World Carlos Ghosn: ‘I did not escape justice, I fled injustice’ 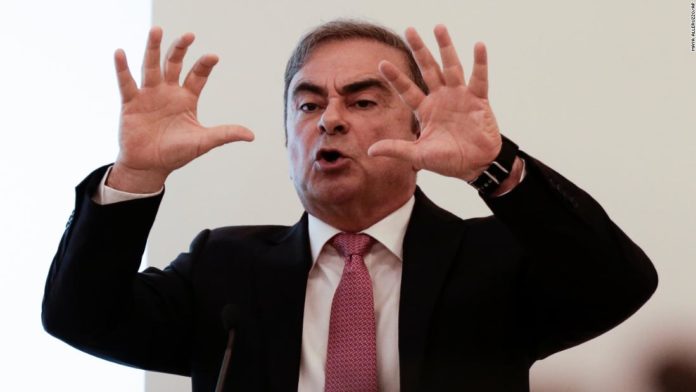 “I did not escape justice. I fled injustice,” the former Nissan chairman told reporters in Beirut on Wednesday, his first major public appearance since pulling off a stunning breakoutfrom Japan, where he was awaiting trial on charges of financial wrongdoing.
He said his intention in speaking out was not to discuss how he fled the country, but to clear his name and explain why he “never should have been arrested in the first place.”
Ghosn was first arrested in Tokyo more than a year ago. Among other charges, prosecutors alleged that he understated his income for years and funneled $5 million of Nissan’s money to a car dealership he controlled.
The former auto industry titan has repeatedly denied the charges, and on Wednesday slammed Japan’s criminal justice system, which he said “violates the most basic principles of humanity.” He pointed to his time in solitary confinement, extended questioning without lawyers present, and the lack of a speedy trial. Japanese prosecutors were intent on extracting incriminating information, not on determining the truth, he claimed.
Tokyo prosecutors said in a statement following the press conference that Ghosn “has only himself to blame for being arrested and detained,” and for the conditions of his bail.
“Defendant Carlos Ghosn fled from Japan by acting in a way that could constitute a crime in itself,” the public prosecutors office said. “His statements during his press conference today failed to justify his acts.”
There was sufficient evidence, they said, to “determine that there was a high probability of obtaining conviction.”

‘I felt I was a hostage’

Ghosn said his lawyers told him he could be held in Japan for five years before he received a judgment, and he became convinced he would die in the country if he did not jump bail.
“I felt I was a hostage of a country that I have served for 17 years,” said Ghosn, who became Nissan CEO in 2001.
Ghosn claimed his arrest resulted from a plot to oust him from the automotive empire he built between Nissan (NSANF), Renault (RNLSY) and Mitsubishi Motors. Nissan executives were threatened by Renault’s growing clout in the partnership, he said.
“Unfortunately there was no trust, and some of our Japanese friends thought that the only way to get rid of the influence of Renault on Nissan [was] to get rid of me,” Ghosn said.
He said he favored greater integration between the companies, including the creation of a holding company that would consolidate shares of the automakers under a single name. Ghosn said he did not call for a merger and still wanted the companies to be run separately.
Tokyo prosecutors denied that they conspired with Nissan to prosecute Ghosn.
Nissan and Renault declined to comment. Earlier, Nissan said it would still pursue “appropriate legal action” against Ghosn.

Ghosn dodged questions about the logistics of his escape, which he pulled off despite strict bail conditions including a requirement that he stay in the country.
Japanese officials have been scrambling to contain the fallout from his escape and figure out how he managed to get out of the country.
On Sunday, Justice Minister Masako Mori said Ghosn left the country “illegally by unjust methods,” and she ordered Japan’s immigration department to “further tighten” rules for leaving the country “so that the same situation won’t be repeated.”
Lebanon said last week that he entered the country legally, according to the country’s national news agency.
Ghosn is a citizen of France, Brazil and Lebanon. Three of his passports had been confiscated and held by his Japanese defense team to prevent him from fleeing the country. But Junichiro Hironaka, his Japanese lawyer, revealed Saturday that Ghosn had a second French passport, with the court’s permission. Hironaka said that passport was tucked away in a keyed transparent box that apparently only his lawyers could unlock.
Japanese prosecutors on Tuesday issued an arrest warrant for his wife, Carole Ghosn, accusing her of giving false testimony during a court hearing last April. She attended Wednesday’s press conference in Beirut.
“You discover this nine months later, one day before this press conference? What a coincidence,” Carlos Ghosn said at the press conference, his voice rising. “This is exactly the way it works.”
Ghosn has denied reports that his family members were involved in helping him flee.
Interpol has issued a “red notice” for Ghosn confirming he’s wanted by Japanese police. Ghosn said Wednesday that his lawyers are looking at next steps, and indicated they may fight back by claiming his case involves “political persecution.”
He claims to be open to a trial outside Japan.
“The first forum where I can express myself in front of a justice which is not biased, I’ll go for it,” he said.
-— CNN’s Chris Isidore, Chris Liakos, Yoko Wakatsuki and Nada AlTaher contributed to this report.