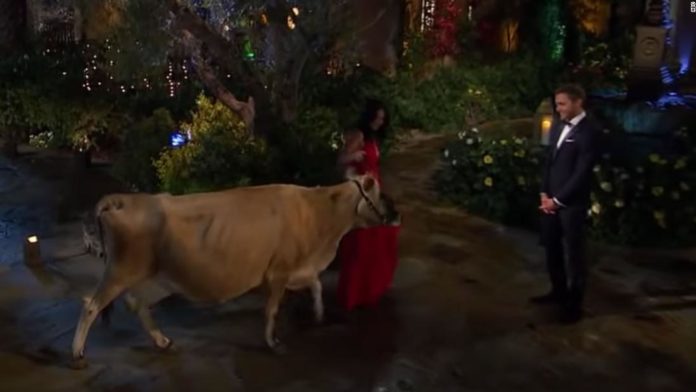 No really, the show’s star Peter Weber is a pilot.
Which might explain why ABC looked to the skies to cast this season. There were several flight attendants around during this week’s premiere.
One of which was Madison who came dressed as a paper plane.
But that was just the beginning of an airline-themed series of introductions. Tammy brought a TSA wand, Courtney rode in on a toy plane and Kiarra even popped out of a suitcase.
Cue the eye roll.
And then there was Eunice — who gave viewers a break from the plane-related puns and showed up wearing giant angel wings. But the winner of most awkward intros came when Jenna arrived with an emotional support cow named Ashley P.
Just when you thought your jaw couldn’t possibly hit the floor again, Weber’s ex, and last season’s “The Bachelorette” star, Hannah Brown showed up sobbing asking for another chance.
Wait, what?
“The Bachelor” airs each week on ABC and for now, at least, Weber appears to be on cloud nine.