Home Culture Joaquin Phoenix plans on wearing the same tux to every event this... 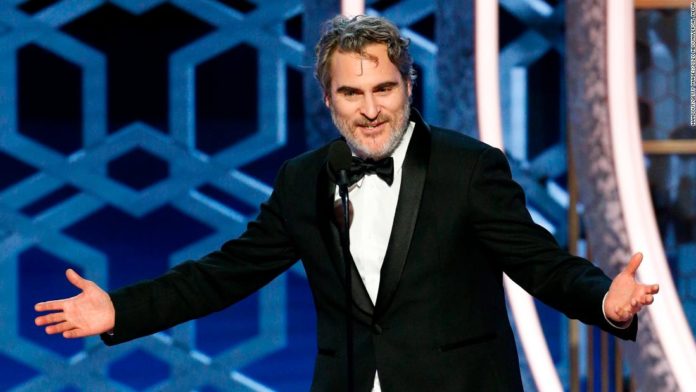 That’s according to designer Stella McCartney, who announced on her official Instagram account that the “Joker” star would wear one of her tuxedos for the whole season to help the environment.
McCartney revealed the news in the caption of a photo showing Phoenix with the Golden Globe he won for Best Actor in a Motion Picture – Drama.
“This man is a winner… wearing custom Stella because he chooses to make choices for the future of the planet and all of its creatures,” McCartney wrote. “He has also chosen to wear this same Tux for the entire award season to reduce waste.”
“I am proud and honoured to join forces with you Joaquin, keep inspiring and keep shining your light x Stella,” she added.
With his acclaimed performance racking up nominations, plan on seeing the actor — looking the same — often.
Phoenix also was outspoken in his activism for the planet during his Golden Globes acceptance speech.
He began by hailing the awards show for having a plant-based menu for the event.
“First, I’d like to thank the Hollywood Foreign Press, um, for recognizing and acknowledging the link between animal agriculture and climate change,” Phoenix said. “It’s a very bold move making tonight plant-based, and it really sends a powerful message.”
What followed was an expletive-filled speech (bleeped by the censors) that challenged Hollywood to do better.
“We don’t have to take private jets to Palm Springs for the awards sometimes, or back,” he said. “I’ll try to do better, I hope you will, too.”
CNN has reached out to reps for Phoenix for comment about his fashion choices.