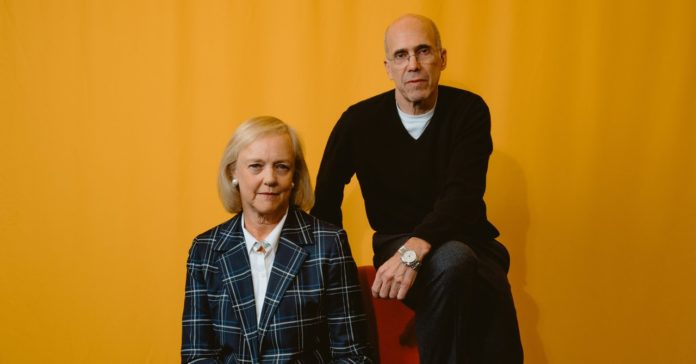 In between, Katzenberg explains that he and Whitman have known each other for 35 years, since he was running Disney and she was a VP there. Katzenberg led the Disney animation renaissance—Lion King, Beauty and the Beast, etc.—that the company is still revisiting with live-action remakes.

But things change. He got ousted, with acrimony, in 1994, and just weeks later announced he was starting a new studio with Spielberg and David Geffen … sparking a whole other animation renaissance (Shrek, Kung Fu Panda, etc.). And now, he says with perhaps some satisfaction, people in Hollywood are joking that if you’re not on a project with Quibi, you’re not really a people in Hollywood. (This seems like the right time to disclose that Roger Lynch, CEO of WIRED’s parent company, Condé Nast, is on Quibi’s board, and WIRED is in early talks about having a show on the streamer.)

After Disney, Whitman went on to a series of heavy-hitter companies, from Hasbro to eBay—when, as she says, it was nonobvious that people wanted to buy stuff online. She left HP after six years at the helm; Katzenberg says he was on a plane to Silicon Valley that night to offer the CEO job at Quibi. She was planning to go travel; he pitched her for three and a half hours. He needed what she knew. “If you don’t ask, you don’t get it. If you don’t take a swing, kick the ball, run with it, you don’t score,” Katzenberg says. “I’ve always come from the school: Go for the unattainable. This is honestly the second time in my lifetime when I actually got the absolute perfect, unattainable partner.”

The guy can do a meeting, I’m saying. And it was good teeing-up, too, because this is roughly when Whitman joined us in the conference room.

Despite what everyone else I talked to said, Katzenberg’s own hypothesis for why a large fraction of Hollywood signed up to make Quibi shows has little to do with him, or even with technology. Broadly, it’s a little bit “show” and a little bit “business.”

The “show” part is the next turn of the evolution of story structure, he says. Movies are a couple of hours of story meant to be consumed in a gulp; TV shows you can choose to see as either a unit of 22 minutes or 42 minutes (that’s show minus commercials), or as a however-many-hours-long story taking one season or many.

But in all of those formats, the secret, irreducible unit is the act. As in a play, these are story subsections, akin to chapters. Movies have them, though smart screenwriters disagree about how many and how long they ought to be. In radio and broadcast TV, commercials became de facto act breaks—an hour-long show has roughly five, in the modern construction. “And the first act break is always at—” Whitman says.

“—eight and a half minutes,” Katzenberg finishes.

So while short online video seems more like the purview of a social network or YouTube, the fact is that TV and moviemakers already understand the qui in Quibi. (It’s short for “quick” in case you’ve forgotten. Yeah, I’m not really sure about the name either.) They’re already making shows with acts of 10 or so minutes.

They can already imagine series with those constraints—whether they’re single stories told over multiple episodes or anthology-type shows like Sam Raimi’s 50 States of Fright, which will tell different scary stories set in every US state. “What Quibi is doing is taking these two proven sciences and actually converging them together for our ‘lighthouses,’” Katzenberg says, “in which we’re telling a two-hour story in chapters that are seven to 10 minutes long.”