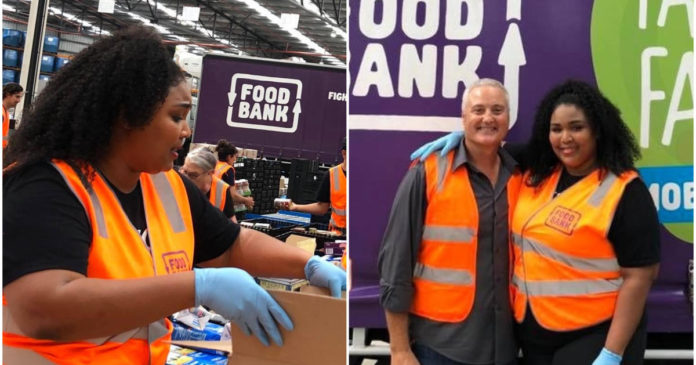 Lizzo just happens to be performing in Australia while the country is experiencing one of its most devastating wildfire seasons to date. Instead of taking the stage and then leaving, the singer took time to help out at a local food bank.

Foodbank Victoria shared photos of the “Good as Hell” singer visiting its Melbourne location. “Beautiful Lizzo stopped by our Foodbank Victoria warehouse today to thank our hardworking team and vollies who have been working tirelessly for the past 6 days,” the post on Foodbank Victoria’s Facebook read.

“What a ⭐️ she even packed hampers for fire-affected regions. Thank you for the support,” the post continued. Photos shared by the food bank and volunteers on social media show the 31-year-old performer packing boxes and posing with fans.

On their website, Foodbank Victoria encouraged others to help out, just like Lizzo, by donating and delivering emergency food to brushfire victims. “Our state is in the grips of a bushfire crisis, and Foodbank Victoria immediately responded delivering urgent food relief hampers,” the site reads.

According to the food bank, many residents in Victoria are isolated and lack access to food, water, electricity and communication because roads are cut off. “Foodbank Victoria sent life-saving food and water to Mallacoota by sea to assist,” according to the site. “As the bushfire crisis unfolds, your support today will ensure vital food and water is provided to those in desperate need.”

So far, at least 12.35 million acres have burned, destroying about 2,000 homes and killing at least 25 people. In addition, wildlife experts estimate more than 1 billion animals have been killed by the fires across the continent.