Home World Our Best Shot At Finding Alien Life Might Be Around This Type...

As researchers search the cosmos for extraterrestrial life, it’s important to look for more than life-friendly planets. Another crucial factor in whether life can survive is the star those planets orbit.

In recent years, some astronomers have suggested that a type of dwarf star, called K dwarfs, may be offer a “sweet spot” for hosting life-friendly planets. Now, a group of researchers has studied a large batch of these red dwarfs to better understand their properties. They also evaluated how hospitable known exoplanets around K dwarfs may be for life.

They might actually be our best bet. The researchers suggest that K dwarfs may be the most promising type of star for hosting habitable planets.

They presented their findings Wednesday at the 235th meeting of the American Astronomical Society in Honolulu.

K dwarfs are a type of red dwarf — stars smaller and redder than our sun and other “G-type” stars. But, among red dwarfs, they’re the larger ones; red dwarfs on the smaller end of the spectrum are called M dwarfs.

The majority of stars in the Milky Way galaxy are red dwarfs. For that reason, astronomers have been very interested in learning what surface conditions — and, thus, the potential for hosting organisms — would be like for planets orbiting these stars. One big concern is that M dwarfs tend to give off a lot of high-energy X-ray and UV radiation, which can be harmful for life. 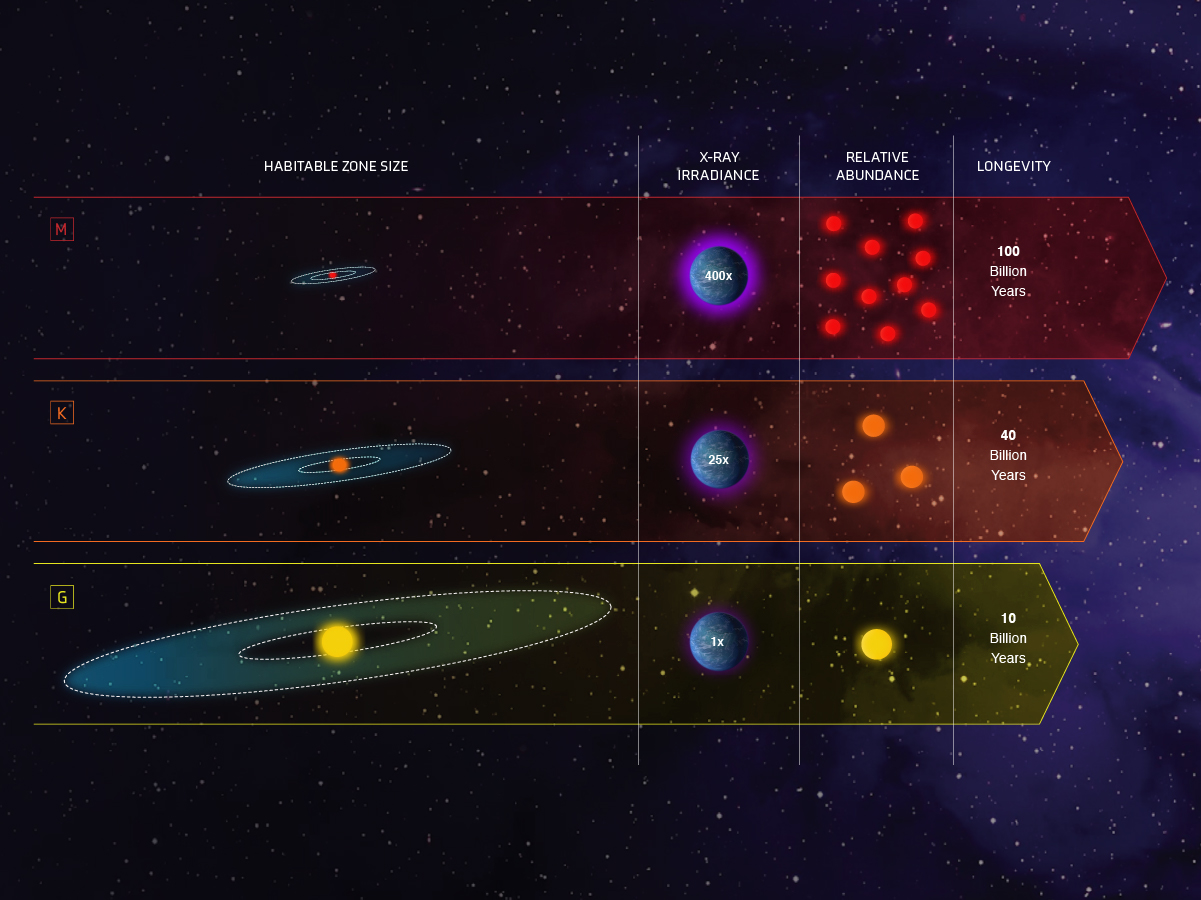 K dwarf stars may be “Goldilocks” stars for extraterrestrial life, with properties between the more dangerous M dwarfs and shorter-lived and rarer G stars like our sun. (Credit: NASA, ESA, and Z. Levy (STScI))

K dwarfs, on the other hand, don’t give off so much dangerous radiation. A group of researchers, including Edward Guinan, an astronomer at Villanova University, found that planets orbiting K dwarfs would probably only get bombarded by one-hundredth the X-ray radiation that planets around M dwarfs would receive.

The team also points out that K dwarfs have the added benefit of a longer stable lifetime than G-type stars like the sun.

“There’s nothing wrong with a G star,” Guinan said during a press conference. “They just don’t live too long.”

Stars like our sun spend about 10 billion years in the stable, “main sequence” phases of their lives before ballooning into red giants. But K dwarfs can live for 15 to 45 billion years before growing into red giants, giving planets around them much more time to potentially evolve life — and keep living things around for longer.