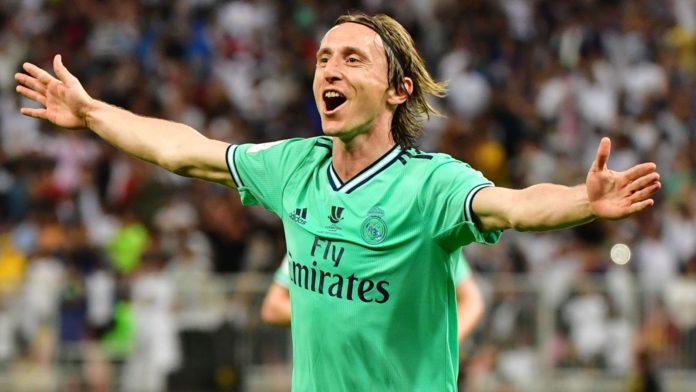 Real Madrid will face either Barcelona or Atletico Madrid in the final on Sunday but they will be without Gareth Bale, who will miss the game in Saudi Arabia

Real Madrid cruised through to the final of the Spanish Super Cup following a 3-1 win over Valencia in Saudi Arabia.

Luka Modric then put the tie out of sight shortly after the hour mark with his side’s third of the evening at the King Abdullah Sports City in Jeddah.

Daniel Parejo scored an injury-time consolation for Valencia, with Zinedine Zidane’s side to face the winner of Thursday’s last-four tie between Barcelona and Atletico Madrid.

Valencia were only denied victory by Karim Benzema’s stoppage-time equaliser when the two sides met in the league earlier this season.

But Madrid, even without the unavailable Benzema and Gareth Bale, dominated Wednesday’s last-four clash as they bid to win the revamped tournament for an 11th time.

The Valencia goalkeeper scurried back to his line, but was unable to prevent the midfielder’s audacious effort from crossing the line.

Madrid controlled the opening period, with Isco then scoring a second for Zidane’s side six minutes before the interval.

Modric’s shot was blocked by Ezequiel Garay, only for Isco to coolly control the rebound on his chest and rifle home a volley from 12 yards.

Modric put the game beyond Valencia when he collected Luka Jovic’s pass and then bent the ball into the bottom corner with the outside of his right foot in an exquisite finish.

Sergio Ramos was penalised in injury time for handball, and Parejo made no mistake from the spot as he fired one back for Valencia.

But it was Madrid’s night and they will be afforded an extra day of recovery before Sunday’s final, which also takes place at the King Abdullah Sports City.