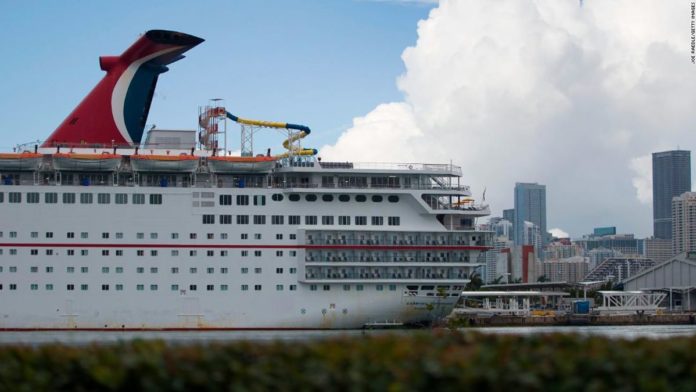 (CNN) — Think your profanity-laced T-shirt would be fun to wear on your next cruise?

That means nothing worn during the cruise should “contain any message that may be considered offensive or contain nudity, profanity, sexual innuendo/suggestions. In addition, clothing/accessories should not promote negative ethnic or racial, commentary, or hatred or violence in any form.”

While Carnival’s crew isn’t “the clothing or expression police,” spokesman Vance Gulliksen says the change came after some reports in other travel sectors of customers wearing clothing with “very threatening messages.”

Beyond the basic guidelines

“We already have some basic clothing guidelines in place and our guests respect them and understand we are a family-focused business,” he says. The reports started a new discussion “about how we were prepared to handle such a situation and the need for clarification to both guests and crew.”

“Similar to other forms of travel on land and by air, cruise lines have a wide range of policies put in place to create a welcoming and inclusive environment onboard their fleet of ships,” she says. “Those policies cover everything from dress codes to alcohol consumption, and give cruise lines the authority to enforce the policies however they deem necessary.”

“Following the announcement, we’ve seen a number of cruisers come out in favor of this policy change and hope to see the line able to enact the rule onboard,” said McDaniel.

Gulliksen said staff “will look out for guests wearing clothes with inappropriate images or language and ask them to change as needed. We will evaluate situations on a case by case basis and take appropriate steps as necessary.”

The cruise line’s other attire guidelines for the dining room and other public spaces remain the same, Gulliksen says.

Some cruisers love the change

Lots of posters on CruiseCritic’s message boards applauded the change.

“Well, I for one, hope their new policy is effective. I cringed every time I saw someone with a profanity bearing tshirt. It’ll be hard to enforce though,” wrote Cruise Critic Member Joe817.

“Sad that common courtesy has declined so much that people have to be requested not to wear clothing with vulgarity or hate speech in multi-generational public settings,” wrote Cruise Critic Member simplelife.

Too subjective for others

“That policy is way too broad and vague. Offensive??? People today are too easily offended. Some may be offended by a t-shirt with a Christian cross or a Star of David on it. Or a MAGA hat,” wrote one poster.

“Bernie Sanders and AOC are extremely offensive to me. Can I complain about those?” asked another poster.

Sorry about that ugly sweater

This doesn’t mean you can avoid the ’80s.

You might think the cruise line’s December Ugly Sweater Contest or the ’80s Rock-N-Glow Deck Party are offensive on principle, but those specialty events and cruises will continue.