Home Sport Sessegnon: Jose wants me to be aggressive 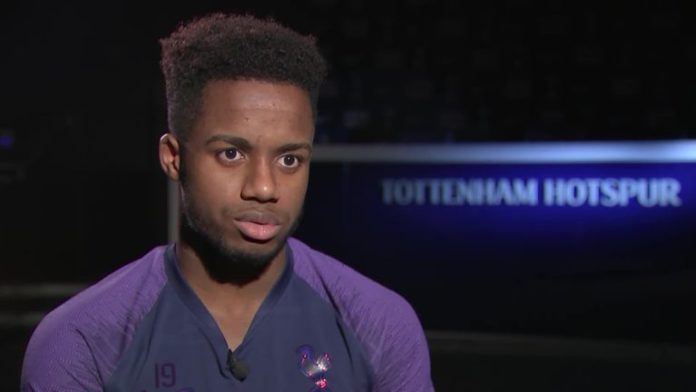 Ryan Sessegnon says Tottenham head coach Jose Mourinho has instructed him to be more aggressive off the ball when playing at full-back and wing-back.

The 19-year-old, who was brought to Spurs by former manager Mauricio Pochettino, had to wait until November to make his debut for the club due to injury.

But he has managed to find his fitness and opportunity under Jose Mourinho, starting each of Spurs’ last four games ahead of Saturday’s match against Liverpool, live on Sky Sports Premier League.

In an honest assessment of his time at Tottenham so far, Sessegnon revealed how Mourinho is trying to tweak his playing style.

“I think he wants to vary me in different positions,” he told Sky Sports News.

“If I am playing at full-back or wing-back he wants me to be aggressive off the ball – that’s something I have been working on in my game.

“(He wants me to) be more positive on the ball as well. I’ve been a bit disappointed in myself, the way I have been playing recently. It’s an honest assessment from me looking back at it.

“I’m usually a very positive player with the ball but the last few games I haven’t exploited areas which I usually would. For the upcoming games, if I am involved, I will have to do better.”

‘Bale has the attributes I want’

Sessegnon’s rise with Fulham over the last few years and subsequent transfer to Spurs has seen constant comparisons to Ashley Cole and Gareth Bale.

The player himself says he wants to add some of the Welshman’s mental and physical attributes to his game but acknowledges he is still way off the Real Madrid star’s standard.

“I think [the comparisons are] definitely a confident boost. [Bale] was one of the players that I looked up to when I was younger, especially when he was at Southampton bombing up on the wing.

“He has attributes that I want to add to my game. In terms of attacking intent, the mentality to get in behind on the left flank and dribble with the ball, I’m trying to add a little bit of that into my game.

“If I could ever become as great as he has become it would be a massive achievement. I’m so far off at the moment.

“I set my standards very high, so I’ve got a lot of improvement to do, I’m still learning the game.”

‘I see myself at full-back long term’

Sessegnon has seen himself deployed as a orthodox left-back in a four-man defence, a wing-back in a five-man defence and also a more traditional left-sided midfielder at both Fulham and Spurs.

“I think at this moment in time I don’t have a preferred position, I see myself long term at full-back,” he said.

“When I watch myself in clips, the way I play, my body shape, I feel like I am more suited to an attacking left-back role.

“But I always have it in my mind to be strong defensively as well. It’s just getting the balance between attacking and defending.”

‘I need to tweak my mentality’

Sessegnon stressed the importance his family has played on keeping him grounded in his early career but says he is now at a point where he needs to alter his mentality for the next stage of his career.

“They are very proud of my but at the same time they keep me very grounded as well,” he explained.

“There are highs and there are lows at the same time so when I do receive achievements and highs (like at Fulham) I don’t really celebrate too much. At the same time I know that it can turn into a low straight away.

“When the lows come I try not to be too disappointed in myself, I try to keep the balance, that’s just how I deal with success and failure.

“That’s not going to change for me, there are things in my mentality that for me to be at the top I need to tweak a little bit.”