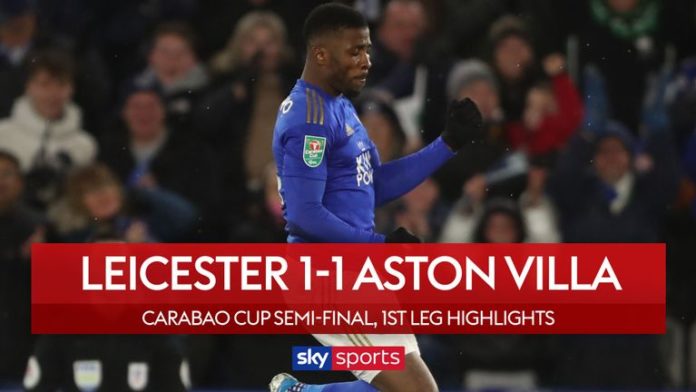 Aston Villa secured a 1-1 draw in the first leg of their Carabao Cup semi-final against Leicester and Jack Grealish’s quality shone through, writes Adam Bate from the King Power Stadium

It had been billed as the battle of the number 10s and if you were to peruse the stats from the Carabao Cup semi-final first leg between Leicester and Aston Villa then it would be easy to convince yourself James Maddison had won the contest. He had eight shots. Jack Grealish had none. He created more chances and had twice as many touches.

But it was the Aston Villa captain whose class shone through.

Grealish did not have much to work with but for a player noted for his swagger it was the little things that captured the attention in front of watching England manager Gareth Southgate. He kept the ball when his team needed it, played the right passes, carried the ball when those passes were not on and generally frustrated Leicester throughout.

After struggling to get on the ball in the early stages, it was a moment between the two playmakers that turned the tide. Grealish picked Maddison’s pocket inside the Villa half before buying the first of seven fouls on him, prompting chants of ‘Super Jack’ from the visiting fans. Moments later he had his first run at the defence and Villa were one up.

From that point onwards, he was superb. Just before half-time there was a lovely piece of skill down by the touchline as he danced away from a couple of markers before switching the play, but most of his work showcased his game management rather than his skill.

He dropped deeper just to help his side relieve the pressure with some possession. His passes pulled his own players around the pitch, inviting their movement. Had team-mate Douglas Luiz shown half the ability to hold the ball rather than find himself brushed off it by Hamza Choudhury then Villa would most likely have held on for the first-leg lead.

“Jack showed his composure on the ball,” said Villa boss Dean Smith afterwards. “I thought it was a great, mature performance again. He carries the ball so well. He has got great balance and I probably felt that was what we lacked for the first 25 minutes today.

“Until he got on the ball I thought we were a little bit rushed and gave them the ball, with the exception of Jack. After the goal, other players started to have that belief. That is what Jack brings to us at the moment. He is a top player and he is doing well.”

This was always going to be a big season for Grealish after spending three seasons in the Championship with his boyhood club. The Villa supporters were in no doubt. They knew wider audiences were about to see what they had been watching week in and week out. But not only has Grealish proven the bigger stage is where he belongs, he has improved.

This is already the best season he has ever enjoyed in front of goal, finding the net eight times despite his team’s stuttering start to the campaign. There have been five assists in the Premier League and he would have added another in the Carabao Cup had Ezri Konsa been able to nod his free-kick a fraction lower to give Villa a two-goal lead on the night.

The statistics show only three players have created more chances in this season’s Premier League. The Konsa opportunity came from a free-kick but when it comes to open-play chances created, Grealish has fashioned far more openings not just than Maddison but more than any other English player in the competition.

That’s just a clue to his importance to Villa, something that’s illustrated by the fact he has created almost a quarter of all the chances they have had in the Premier League. By way of comparison, that’s a similar level of influence to that which Kevin De Bruyne, statistically the competition’s most creative player, is having at his club Manchester City.

All of which explains why he is targeted. It was a problem in the Championship but it has not changed at the higher level. Some of the contact is clever play, inviting the foul, but Smith has still complained of “tag-teams having a free whack at him” and Grealish has been fouled 88 times in the Premier League this season – far more than anyone else.

This season has tested him in other ways too. Grealish sees himself as a central midfielder and claims to hate playing on the left. But he was moved wider after the first six games of the season with Villa struggling to get enough support up to their new striker Wesley.

On the face of it, that takes him away from the heat of the action, but it has freed him from some of his defensive duties – making Villa that little bit less open – and allowed him to focus on providing that link for his team in the final third of the pitch. Crucially, it has not stopped him getting involved.

“I’m not playing like a left-winger, more of an inside number 10,” Grealish explained. “The manager wanted me to get closer to Wes because, at the start of the season, maybe that’s what we were lacking a bit.”

Against Leicester on Wednesday night, in the absence of the injured Wesley, there was another role with Grealish operating as a false nine at times as part of a fluid front three. Smith joked afterwards he had taken a page from the Pep Guardiola playbook after Manchester City did something similar in their semi-final the previous night.

Guardiola will surely have been watching this game given his City side go to Villa Park on Sunday, but he is already a confirmed admirer of Grealish anyway – something he made clear after the last meeting between the two teams at the Etihad Stadium in October.

Too expensive for admirer Guardiola?

City’s second-half performance took the game away from Villa that day but despite the 3-0 win for the champions, Guardiola still found time to praise Grealish. Indeed, his eyes lit up when discussing the player’s ability and his attitude. It was clear he was a long-time admirer.

“He is an incredible player,” he said. “I am happy for the fact that he is an Aston Villa player. The fact that he had offers to move on but he decided to stay in the Championship. I like the fact that they were promoted to the Premier League and he defended his club.

“He is fast in the final third. Vision. Passes. He always creates something. He is an exceptional player… but too expensive for Manchester City.”

Grealish has scored four goals in eight games since then.

He is not getting any cheaper.

“I think he is a big target for many teams and you can see why,” Smith said recently. “He’s a top player but as I’ve said before, our owners are very ambitious and want to establish us as a top Premier League club. To do that you have to keep your best players, so we’ll be keeping hold of Jack Grealish. People can keep looking but they can’t touch.”

Everyone is looking now and whatever happens next there is no chance of Grealish returning to the Championship. Thankfully for Smith, if his captain continues to play with such confidence, maturity and class, there is little chance of Aston Villa returning there either.