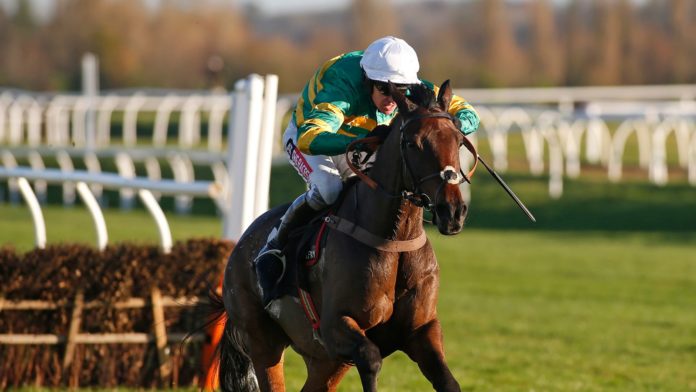 A trip to Haydock for the Rendlesham Hurdle is next on the agenda for admirable veteran Unowhatimeanharry.

Harry Fry’s 12-year-old was unable to keep tabs on Apple’s Jade in the Frank Ward Memorial Hurdle at Leopardstown over the festive period, but finished a clear second in the three-mile Grade One – beating the likes of Penhill and Bacardys.

Unowhatimeanharry defied his advancing years to win his second Champion Stayers Hurdle at the Punchestown Festival in May – and a potential hat-trick bid is a major target.

However, he could first make an appearance on Merseyside on February 15.

Fry said: “He was no match for Apple’s Jade on her happy hunting ground of Leopardstown, where she’s unbeaten, but he ran another creditable race and doesn’t owe us anything.

“He’s back with us now and seems in good form, so we might look at going to Haydock for the Rendlesham before heading back to Punchestown.

“We’re not thinking about Cheltenham for him this year.”

While Unowhatimeanharry is set to sidestep the Cheltenham Festival in March, two Fry inmates who could head to the showpiece meeting are King Roland and If The Cap Fits.

Dual bumper winner King Roland opened his account over hurdles with a dominant display at Exeter on New Year’s Day and could develop into a realistic contender for either the Supreme Novices’ Hurdle or the Ballymore.

If The Cap Fits – not seen seen winning the Coral Hurdle at Ascot in November – is set for a fascinating clash with star stayer Paisley Park in the Cleeve Hurdle at Cheltenham in late January.

Fry said: “We didn’t see much of the race due to fog, but King Roland obviously won well at Exeter, and it was a nice step forward from his hurdling debut (finished second at Newbury).

“We haven’t made any firm plans. Whether we step him up in class for his next run or not, we’ll just have to see.

“If The Cap Fits is fine and very much on target for the Cleeve, where we’ll be taking on Paisley Park.

“We’re very happy with him at the moment. It will be his first run at Cheltenham, so it will be vital experience for him – and we’ll learn a lot, I’m sure.”