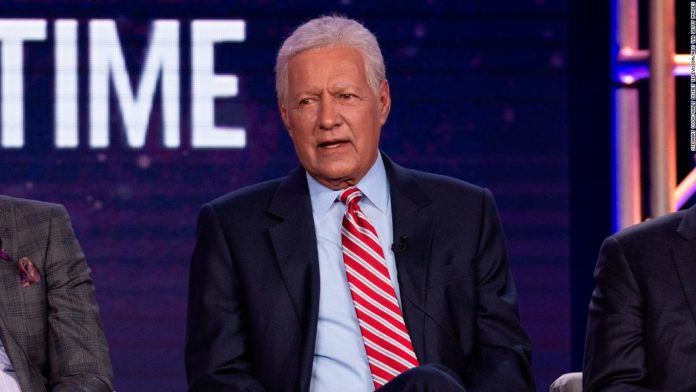 He was, however, crystal clear about what he hopes viewers have taken away from him and the show during his years as the host of “Jeopardy!”
“The benefits of knowledge,” he said. “Even though you are not going to use a particular bit of knowledge, information that you acquire — even though you’re not going to be able to use it in a practical way in your daily life or in your work life or at home, whatever — it becomes part of you. It enriches you and makes you a better human being and, I think, a more understanding human being.”
He added: “The more you know, the easier it will be to understand everything else that’s going on in the world. If you have limited knowledge, then you’re approaching other people from a limited point of view, and that can be disastrous, as we have discovered.”
Trebek was sharing the stage with three of the most knowledgeable people to walk on the “Jeopardy!” stage — James Holzhauer, Ken Jennings and Brad Rutter. Executive producer Harry Friedman was also present.
They were on hand to promote the ongoing “Jeopardy! Greatest of All Time” competition. (Jennings won the first night of competition, while Holzhauer won night two.) Tried as they may have to stay on task, much of the discussion was aimed at Trebek, who is currently fighting a battle with pancreatic cancer.
Questions on his legacy, his eventual retirement, and his place in television history dominated their time on stage. Though, he tried to stay humble.
“You’re very kind,” he told one reporter, who told him that he was at the “top of your game.” “Keep in mind that my success to a great extent has depended on the success of the game. You could have put somebody else in as the host of ‘Jeopardy!’ 36 years ago … and if the show had lasted 36 years, they would be enjoying the same kind of favorable reviews and adulation that I have enjoyed in recent years.”
He also, as he did at the daytime Emmys last year, dismissed some of the adulation as being a result of what he called a “pity factor.”
“People have been so kind, sending prayers and good thoughts and all of that. So I’m not unaware of that,” he said.
Trebek continues his duties at the show through his chemotherapy treatments. He admitted, “some days are better than others.”
“They’ve got me off one of my chemo drugs, which was killing me. And I won’t know till tomorrow (when) I go in for some tests, and then maybe another week or so before I find out where things stand,” he said.
When the time does come for him to step down — and he doesn’t see that “moment coming up in the near future” — Trebek knows what he’ll miss most of all.
“I tell audiences who come to our tapings that the thing I enjoy most about the show is the 30 minutes I spend onstage with the contestants, because I love spending time with bright people. And with these three, it was particularly enjoyable,” he said pointing to the champions with whom he shared the stage. “I hate spending time with stupid people.”