Our tongues can get fat. And scientists say losing tongue weight might be an effective way to manage obstructive sleep apnea, a condition that affects an estimated 22 million Americans.

That’s according to a study published this week in the American Journal of Respiratory and Critical Care Medicine by researchers at the University of Pennsylvania exploring the surprising relationship between tongue fat and sleep apnea.

The researchers found that when overweight people with sleep apnea lost pounds, their tongues also got smaller. And, of all the changes that occurred as a result of slimming down, a reduction in tongue fat had the biggest impact on improving sleep apnea.

Until now, it was unclear why weight loss helps manage the sleep condition.

Thick in the Tongue

On average, the study’s 67 participants lost 10 percent of their body weight over six months. That, in turn, resulted in a 31-percent average reduction in sleep apnea severity as measured by the Apnea-Hypopnea Index, a method that doctors use to score sleep apnea.

Losing weight led to a 20-percent reduction in tongue fat on average, according to study author Richard Schwab, a physician and co-medical director at the Penn Sleep Center.

The reduction in tongue fat was significant enough to hypothetically reduce a case of severe sleep apnea (more than 30 instances of breathing disturbances a night) to a more moderate form of the condition (between 15 and 30 disturbances).

This new study is a follow-up to work Schwab published in 2014 that found overweight people with sleep apnea tended to have larger tongues, often with fatty concentrations at the base. Having too much tongue fat might limit the oral muscles’ ability to properly position the tongue away from the airway, Schwab said. 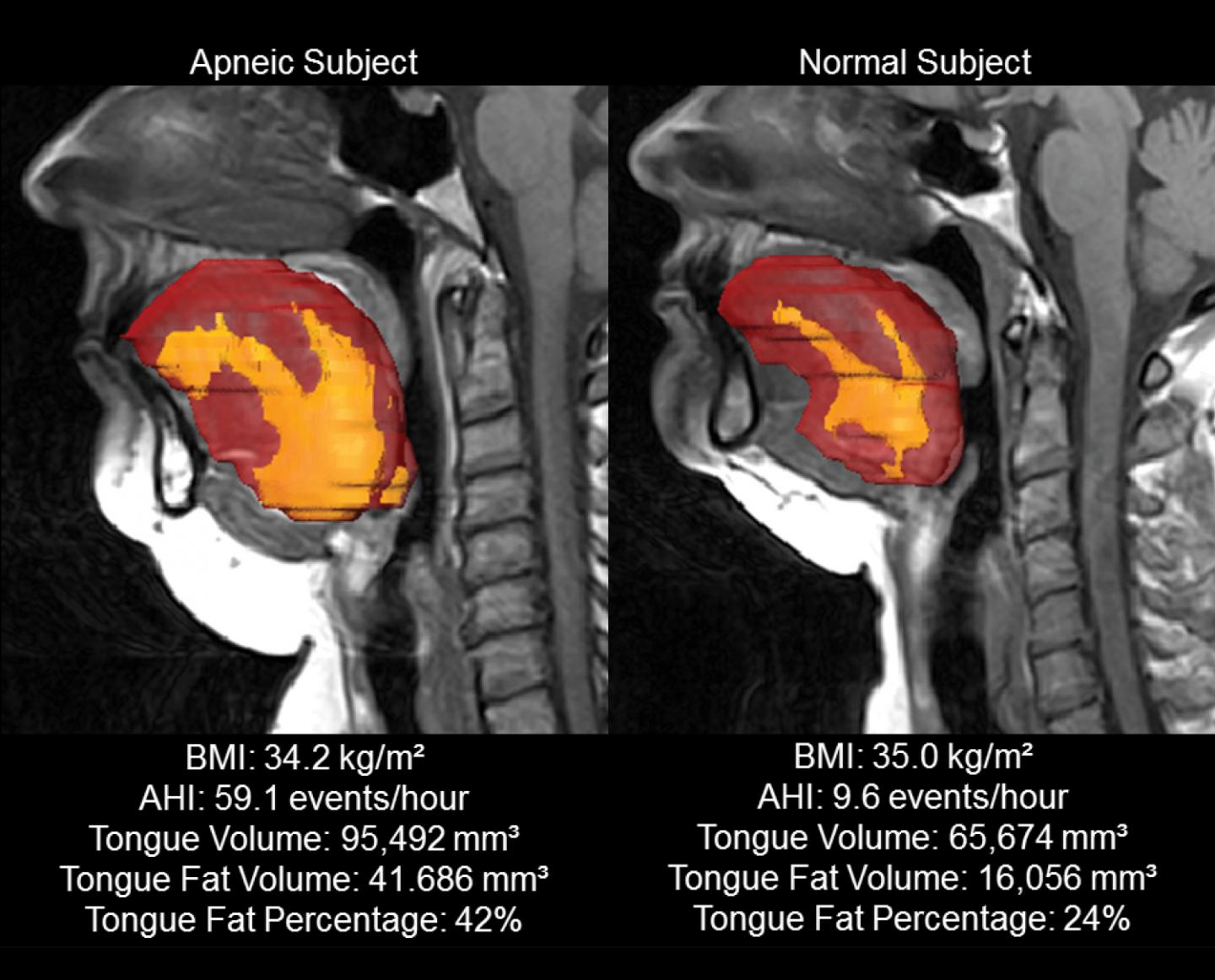 This comparison shows the difference between the tongue of someone with and without sleep apnea. (Credit: American Academy of Sleep Medicine)

Obstructive sleep apnea is a potentially serious condition in which a person’s airway becomes blocked while sleeping, often multiple times a night. Although the condition is rarely fatal, people with sleep apnea are at greater risk of developing health complications including high blood pressure, heart attacks and strokes.

Being overweight or obese is a significant risk factor for sleep apnea. But anatomical characteristics, such as a recessed jaw, also can contribute to the condition, Schwab said.

Because people with sleep apnea tend to snore intensely and wake up gasping for air, doctors might recommend they sleep with a continuous positive airway pressure (CPAP) machine, which helps keep airways open. But up to 25 percent of people with the condition either don’t want to use CPAP machines or they use them incorrectly.

“CPAP works 99 percent of the time … but many people don’t like the feeling of wearing a mask or being hooked up to a machine,” Schwab said. 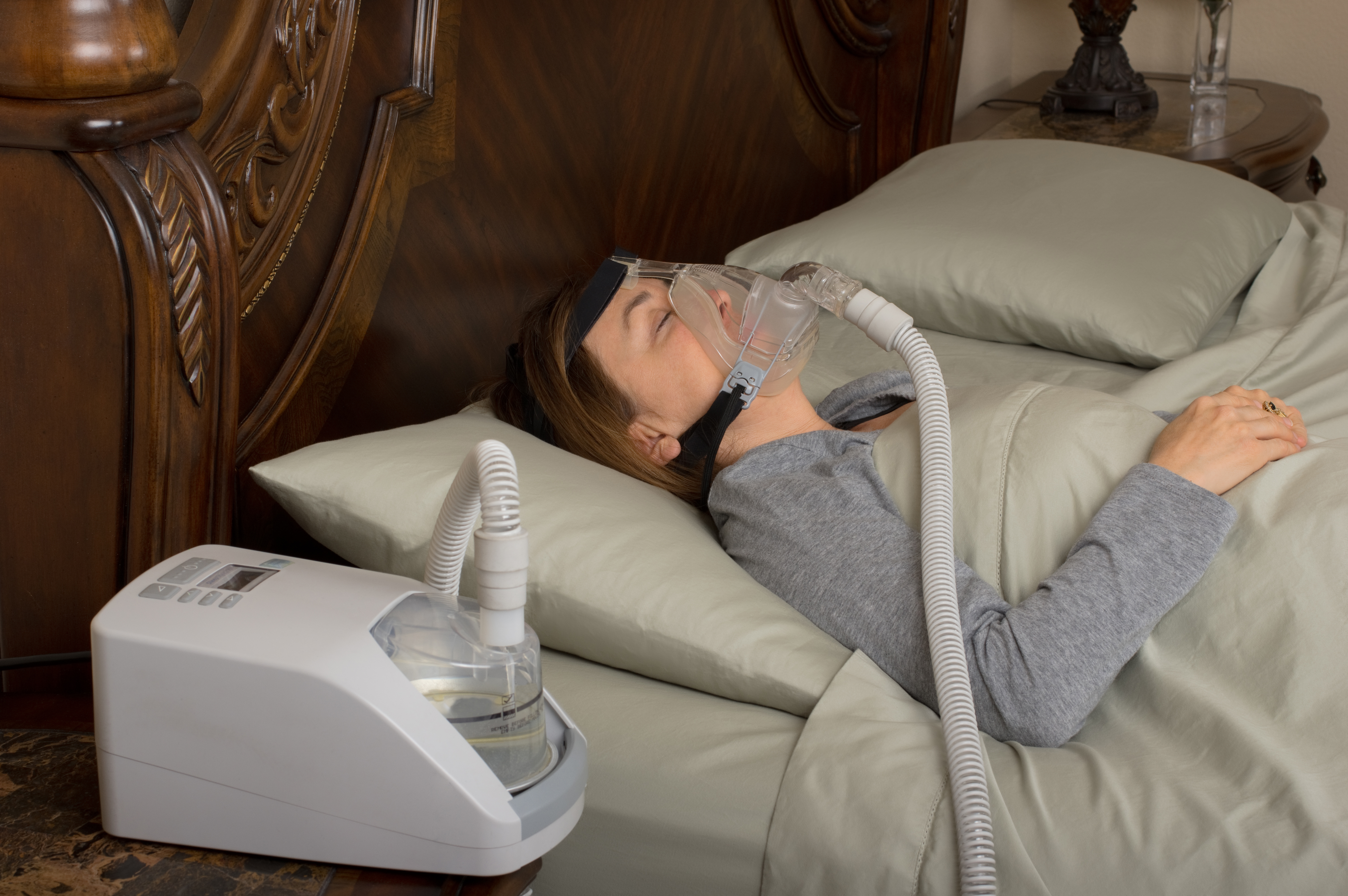 That’s why targeted tongue fat reduction therapies could be a game changer in treating the condition — especially among patients who find it challenging to lose weight.

One such treatment with therapeutic potential is known as cryolipolysis, or CoolSculpting,  a nonsurgical procedure that’s gaining popularity in the cosmetic surgery industry. It works by freezing away fat cells located in a specific area of the body. More work is needed, however, to determine whether the method could work on the tongue, Schwab said.

Other therapies on the horizon might be diet-based — or they could be as simple as picking up a new hobby, Schwab said.

“What if a low-fat diet could reduce tongue fat?” Schwab said. “We also know that upper airway exercises can improve [sleep apnea] … it might be that playing the tuba or having a job where you have to talk a lot could protect you.”

Next, Schwab and the research team plan to explore the genetic factors that might predispose someone to having an overweight tongue, as well as the effectiveness of different approaches to reduce tongue size. But in case you’re wondering, tongue liposuction probably won’t be on the table anytime soon.

“Think of the tongue like a steak … there might be a layer of fat on the outside, but there’s also all that marbleized fat … and you probably couldn’t liposuction that out,” Schwab said.