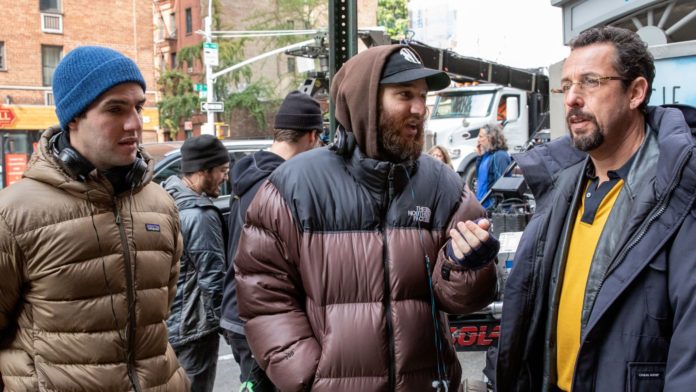 The Safdie brothers, who directed Adam Sandler’s award-nominated performance in Uncut Gems, say the actor over-delivered on their expectations.

Ben and Josh Safdie told Sky News they had always wanted him for the part of Howard Ratner, a diamond dealer with a gambling problem.

“And I say that having sat there with the footage. You look at it and you look at the little micro decisions that he makes, the little pieces of humour that he would add improvisation to.

“There’s a lot of dialogue for Howard, a lot of monologues, basically, and you just kind of say ‘we’re gonna get a guy who can memorise this stuff’.”

Josh, 35, said that they had admired Sandler’s work from a young age.

“He was the only person who could have grounded the tension of this film,” he explained.

“And, you know, we’ve been fans since we were little kids of his comedy records and then the movies, obviously.”

Ben, 33, agreed: “He [Sandler] puts you in these situations that are so absurd, and yet you totally believe him.”

The movie leads the nominations at this year’s Indie Spirit Awards with five, including a best actor nod for Sandler.

It’s also won prizes from the National Board of Revie and some US critics circles.

But the Safdies seem reluctant to get caught up in awards buzz.

“The award was getting it made honestly, the award was shooting day one, knowing the film was going to be distributed, that was crazy,” said Josh, adding that he was happy to see Sandler getting recognition.

“You watch someone perform like that and you like to see it get acknowledged, but again, it’s a nice surprise.”

Uncut Gems is the sixth film from the Safdie brothers, and is in the same style as their last movie Good Time starring Robert Pattinson – a relentless, exhausting and at times anxiety-inducing watch.

“Good Time was an educational detour to making this film,” Josh explained.

“The difference between the two, is this one has comedic elements to it, it’s more of a comedy… but it’s a thriller, and thrillers you want to be thrilling and you don’t want to let go of that.

“[Uncut Gems] was true to the life of people who work in the Diamond District, they have a lot going on all the time, and sometimes they lend out a million-dollar precious stone and they don’t know if it’ll come back – it was a handshake deal – what are they going to do? And we wanted to capture that in the film.”

Ben added that their experience making Good Time was good practice for them.

“It’s no coincidence that there were literally scenes in Good Time that once we realised we could do something like that, it was a test and like a preparation in a way for what we’re doing here.”

Uncut Gems is out in select cinemas now and on Netflix from 31 January.