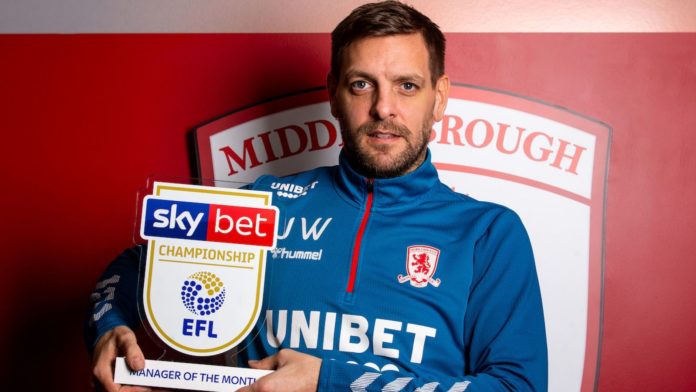 Middlesbrough manager Jonathan Woodgate has been named the Sky Bet Championship Manager of the Month for December.

Patience has been the key on and off the pitch at The Riverside – Woodgate has gradually instilled in his young side a steeliness to pick up points in adversity, notably a 2-0 win at West Brom which made it 13 points from six games.

Woodgate said: “I’m really pleased, not for myself, but for everyone here. It’s all about a team effort, and there’s some fantastic staff at this football club who really care.

“We have a fantastic team spirit at the club, and that togetherness is key to everything we do.”

Barnsley striker Conor Chaplin has been named the Sky Bet Championship Player of the Month for December.

Diminutive in stature, Chaplin made a huge impact in December with five goals and two assists in six games. His energy and effervescence were matched only by his delight in scoring a hat-trick against QPR and the uncomplicated style of his finishing.

Get the EFL rewards app

EFL title-sponsors Sky Bet are giving fans throughout the EFL a chance to win match tickets, money-can’t-buy experiences and signed goodies – just for supporting their club!

Chaplin said: “I’m really happy to win the award. The overall goal is that the team needs to win matches, but it is always nice to get recognition as part of that.

“If you win an award like this, I think it shows that you are doing your best for the team, but there is always room for improvement and I would sacrifice any award for myself if it meant the team winning more matches. We’ve got a big game this weekend and I hope we can continue our recent good form.”

Accrington Stanley manager John Coleman has been named the Sky Bet League One Manager of the Month for December.

Never one to panic over a poor run, Coleman trusts the methods which continue to serve him and Stanley well, collecting 11 points from five unbeaten games, including a stunning 4-1 victory over improving Portsmouth.

Coleman said: “It is a feather in the cap for the team, they are the ones who win it really as the results are down to them. As management staff, we take a small part as we work with them on a daily basis but it is really a team effort.

“To do any damage in this league, you have to win this trophy maybe two or three times. Winning it once in isolation is not good enough if you want to do something in this league. You have to have two or three really good months and if I win it twice more in the first part of 2020, it means we are doing well!”

MK Dons midfielder Alex Gilbey has been named the Sky Bet League One Player of the Month for December.

MK’s improvement in December was due in no small part to the calm elegance with which Gilbey bestrode their midfield. His three goals in five games featured a 20-yard curler at Doncaster and a delightful chip against Portsmouth.

Gilbey said: “I’m over the moon to win the award and it’s a really proud moment for me, I’m chuffed – now it’s looking to build upon this and go again for the rest of the season.

“I’m thankful to the rest of the team as well, we’ve been really good of late and in December we were very good. It’s time to build upon it now, win more games and climb the table.”

Exeter City manager Matt Taylor has been named the Sky Bet League Two Manager of the Month for December.

As impressive as the attacking intent of Taylor’s team is their ability to rescue points from unpromising positions. They did it again in December, recovering from 3-0 down to draw with Walsall and collecting 11 points from five unbeaten games.

Taylor said: “It’s always pleasing to win this award because it’s a sign that the team is doing well, it’s as simple as that. All credit must go to that group of players and the staff I’ve got around me, especially over such a period where sacrifices have got to be made.

“Christmas and New Year’s a fantastic time, but if you’re a footballer, it’s all about being professional. We picked up a pleasing amount of points from that run and the win on Saturday topped that off.”

Bradford City striker Eoin Doyle has been named the Sky Bet League Two Player of the Month for December.

Five goals in as many games means it’s a record three Sky Bet Player of the Month awards in a row for Doyle, as he continues his astonishing season.

Recalled to his parent club Bradford City as the top goalscorer in Europe, Swindon’s promotion hopes will rest firmly on their ability to replace the “Ginger Pele’s” goals in the coming months.

Sky Sports’ EFL pundit Don Goodman said: “Superlatives fail to do proper justice to the season Eoin Doyle is having. To win two player of the Month awards in a row was impressive, but three on the bounce is something seriously special.

“Doyle’s unbelievable form continued during December, with five goals in four games before the New Year. Perhaps the only surprise came when he didn’t bag during Swindon’s 2-0 defeat to Port Vale, bringing an end to his sublime 11-game scoring run.”