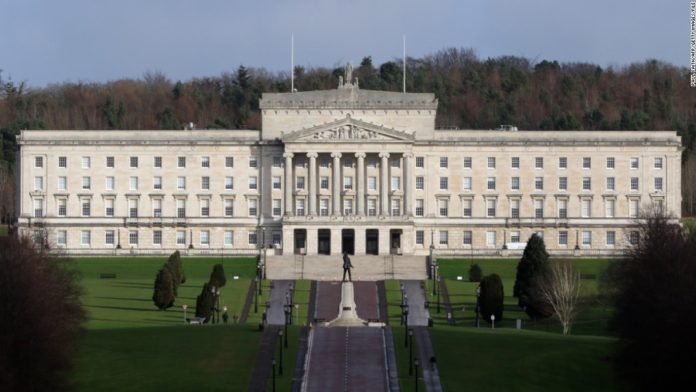 Discussions between Irish nationalists, and unionists who want to remain part of the UK, have been ongoing all week at Stormont, Northern Ireland’s parliament buildings.
If the draft wins the backing of Northern Ireland’s political parties, it will bring an end to three years of uncertainty and avoid fresh elections threatened by Westminster.
Northern Ireland, which is part of the UK, has for years been split over the question of whether it should remain part of Britain or become part of Ireland.
Its power-sharing arrangement obliges nationalists and unionists to work together, but that arrangement collapsed in January 2017, when the nationalist then-Deputy First Minister Martin McGuinness stepped down after a dispute with then-First Minister Arlene Foster, a unionist, over a renewable-energy scheme.
Sinn Fein, the largest nationalist party, withdrew from the power-sharing government, refusing to replace McGuinness as deputy first minister and complaining of unequal treatment.
Since then, both Sinn Fein and Foster’s Democratic Unionist Party have blamed each other for the deadlock.
London had threatened to call fresh elections if no agreement was made by January 13, 2020.
The draft deal, titled “New Decade, New Approach,” sets out a vision for Northern Ireland’s future and aims to address issues that have arisen in the past three years, including ongoing strikes by health care professionals and restoring confidence in the government.
UK Secretary of State for Northern Ireland Julian Smith has described the agreement as “a moment of truth” and called on all parties to form a government on Friday.
“I have written to the Speaker asking him to call the assembly tomorrow to enable the restoration of the executive,” said Smith.
Irish Deputy Minister Simon Coveney said the UK and Irish governments believe the deal was “fair and balanced.”
“There is no need, and no public patience, for more process and more discussions,” he said.