Home World On kangaroo killing field, from horror to hope 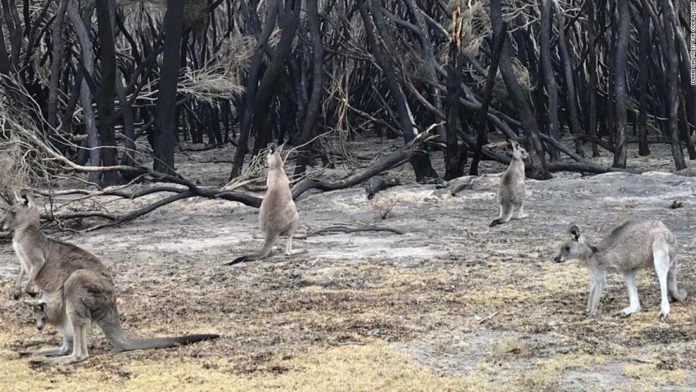 The Mallacoota golf course was a sanctuary for animals fleeing Australia’s catastrophic bushfires, but it has become a killing field.
A mob of kangaroos had gathered on the fairway, the last patch of green grass left after fire ripped through the eastern Victoria town on New Year’s Eve, destroying close to 100 homes and thousands of hectares of native habitat. Over 4,000 locals and tourists had to be evacuated by sea after the fires cut the one road in and out of Mallacoota.
The pristine national park that rings the town is home to native wildlife in an abundance unmatched throughout Australia. The fires burned fast, killing animals in their thousands — and even those that made it to the comparative safety of the golf course were often horrifically injured.
The four kangaroos Barton had to euthanize Thursday morning had third degree burns on their paws and faces that were already becoming septic. It was not going to be possible to treat their terrible injuries, forcing vets to put them down.
“I have nightmares,” Barton says, standing on the golf course. Behind him is a healthy couple — a baby kangaroo feeding from its mother. Moments earlier he had used his rifle to euthanize another joey which was too badly burned to hop. The young male was tranquilized first and then put down swiftly and, the vet said, painlessly.
“I’ve been a vet for 40 years, and I still don’t get used to it. Wholesale slaughter is awful. It still brings tears to my eyes.”
The tears flow as Barton’s wife and clinical partner at Vets for Compassion, Elaine Ong, interjects.
“The animals suffer just as humans do,” she says. “The community has been telling us that they’ve gone through so much trauma and they are further traumatized by seeing the animals suffer. So they are pleased we can come and help the animals.”
It’s somber and difficult work, but leaving distressed animals to suffer through a slower and more painful death is even worse for the pair, who arrived from Melbourne on a trip sponsored by the NGO Animals Australia. Barton and Ong want to draw a line under the horror of the fires that burned almost all the land around Mallacoota, allowing others to begin the task of repopulating wildlife and healing the land.

Southeastern Australia is in the grip of a three-year drought, with significant rain not forecast until April.
The conditions have exacerbated the fires burning across Australia for months, razing homes and wiping out entire towns. Across the country, more than 7.3 million hectares (17.9 million acres) of land has been burned — much of it bushland, forests and national parks, home to the country’s beloved and unique wildlife.
In New South Wales, the state neighboring Victoria, ecologists estimate that as many as half a billion animals may have been affected by the fires, with millions potentially killed. That figure includes birds, reptiles, and mammals, except bats. It also excludes insects and frogs — meaning the true number is likely much higher.
There are fears that some species may not recover, entering a terminal decline, such is the degree to which the fires have ravaged their populations.
But amid all the bleak news, there is still room for hope that Australia’s unique landscape and wildlife could bounce back.
When the rains finally do come, much bushland could quickly recover — particularly eucalypt forests where koalas live and feed. Beds of ash left by the fire provide nutrients for the seeds of Australian gum trees, which evolved to survive and even thrive from fires.
Much of the vegetation that has burned this summer will naturally rejuvenate — and the koala carers in Mallacoota are already preparing.
A short drive from the golf course, volunteers Jack Bruce and Alyex Burges believe they may have found a new home for Wilbur, an adult koala that fled the blazes five days ago. After spending that time in a cage, clinging to a stump and shrouded in a buffet of eucalyptus leaf varieties, he’s going back to the bush.
A fertile gully at the back of Bruce’s family farm has been identified as being relatively unscathed after last week’s flames. But when the pair conduct a cursory check that Wilbur is not going to be put up an already occupied tree, they are shocked to find they have company.
This area was meant to be wiped of life — but up in the canopy is a healthy mother koala with a baby on her back. Birds sing as she takes in some of the 20 hours of sleep the species enjoys a day.
Wilbur gets a tree a few steps down the road. After 10 minutes of wondering whether he’ll give up his blanket and free meals, he crawls out of his cage and up a tree.
Nothing is certain when it comes to wildfire, but the gully Wilbur now shares with his neighbor will hopefully be spared again from fires feared this weekend — it’s surrounded by already burned-out bushland and close to homes. Bruce hopes the two koalas there will be part of the rejuvenation of this previously untouched environment.
“It is sad to go out there and see them suffering. But you have to confront that to give them any chance of survival,” he says. (The survivors will) return back to Mallacoota when it begins to rejuvenate. I think there is hope. It is inspiring and it is encouraging.”
This story has been updated to accurately reflect the number of animals affected by the fires in New South Wales.