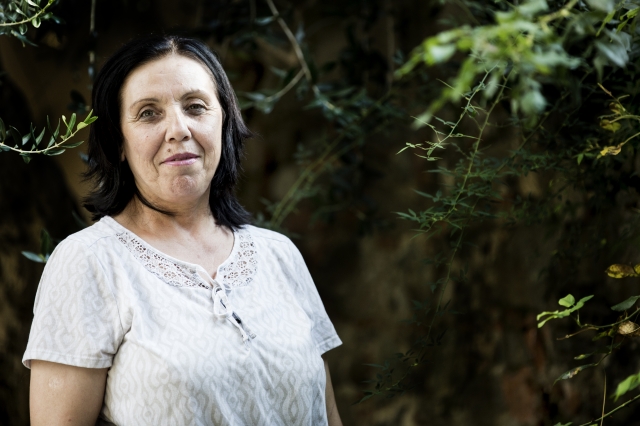 Since 2011, the Syrian conflict has hard hit the families in the country. Family members have been lost, homes and belongings left behind. Food and agriculture practices passed on for generations have been abandoned. Even the ties to home towns, villages, traditions and history have been broken.

Women often bear the brunt of this disruption. For Adla Hasan, for example, when her olive trees stopped producing fruits, it wasn’t just the loss of her livelihood, it was losing a part of her family history. “I make olive products because these are the products which were made for years by my parents and my grandparents. I love my job,” she discloses.

Adla is from Safita, Tartous in the northwestern part of Syria, just north of Lebanon. This is olive-growing country, the Mediterranean climate perfectly suited for the robust trees and their precious fruit. Before the crisis, Adla’s family could live off of their olive production. Now all the money that she makes goes to providing for their daily needs. She has none left to spend on her farm – on fertilizer, irrigation, pruning –  so the trees aren’t producing anymore. She has nothing to harvest.

Adla turned to working in a plastic factory in Tartous, a city 25 kilometers away from her home, as there was no other way to support herself, her brother and his six children.Elsewhere in Syria, Aicha Dalati and her husband also had to leave their home in Aleppo because of the security situation. They moved to a village called Al Dahabeye and live off of their beehives, selling the products to other villagers. As transportation costs have doubled, it is too expensive and too dangerous to sell her products in other villages.

This pattern of displacement and disruption is true all over Syria. Production costs for farmers and processors have become increasingly more expensive, while the profit for selling products has steadily decreased. People cannot afford to buy honey or figs, items that aren’t essential to daily lives. “Any Syrian would prefer to buy oil, heating or winter food items to keep in storage. These are more important for a family than buying figs for delight,” explains Afaf Jafar, a 39-year-old mother of five from the Hama governorate.

Afaf had worked in agriculture ever since she was a girl and her family had always produced figs, but now, like many others, she cannot leave her village to sell them because of the conflict. She must sell her figs for whatever she can get in her own village. Often this does not even cover the costs of production.

The conflict has also exposed other difficulties that women face. Culturally, women were rarely the primary breadwinners. Men usually inherited the land and had more years of schooling. They were trained for various types of jobs and were the ones expected to sell products. The conflict has changed all of this. Many families lost their husbands, fathers or other breadwinners, leaving women solely responsible for earning money and taking care of their families. Some of these women are starting from the beginning, even having to learn from where to get training or the resources they need.

Yet, the potential of women is often grossly underestimated. Offered the same opportunities, such as training, access to land, tools, inputs such as seeds or financial resources to begin a business, women can easily be self-reliant, resilient professionals. Often it is also about confidence and one of FAO’s roles is to promote that in communities around the world. “This work changed my life… When I worked, I felt less stressed and more self-confident. I felt glad to meet people who supported me as well,” offers Dima Talal Jedeed, a lemon juice producer in the Latakia governorate.

Seeing the great potential both in these women and in the agricultural sector, FAO teamed up with Slow Food International to offer Syrian women opportunities to gain the skills and confidence they need to boost their production, but also importantly, to help them identify markets. As part of this initiative, seven Syrian women, as well as a number of female technicians, travelled to the Piedmont and Liguria regions of Italy to learn from farming communities that produce and promote local, organic and artisanal foods. The women also learned about modern ways of growing and harvesting their products, ways that can help reduce the manual labour involved in their production.

On their return to Syria, FAO provided them with further training on sustainable agriculture, hygienic processing and marketing. The project further aims to create and strengthen women producers’ groups, reinforcing women’s roles at a time when they are shouldering a lot of responsibilities.

In conflict areas, FAO supports people in their daily lives, helping to ensure that they can continue to earn an income, provide food for their families, access medical care and send their children to school.  This represents a small but vital contribution to creating peaceful and inclusive societies, the 16th of the Sustainable Development Goals, and one of the most vital.

Humanitarian Economics: ICRC Vice President on how it can better address...

Israel and the Occupied Territories: Restraint and de-escalation urgently needed as...