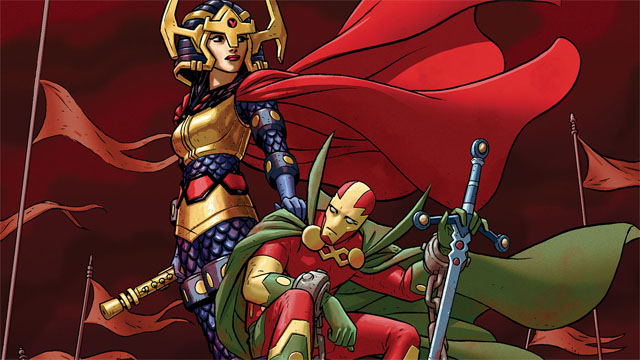 The lead-up to a new comic book movie can be a very exciting time, especially after it’s first announced. Fans immediately take to the blogosphere to debate who they think should play their favorite characters. In the end, the filmmakers’ casting decisions tend to come out of left field. But in the case of New Gods, director Ava DuVernay is apparently open to suggestions for who should star as some of Jack Kirby’s iconic characters.

DuVernay recently gave an update on her adaptation of Kirby’s beloved epic on Twitter. She confirmed that the script is still in as she collaborates with comic scribe Tom King. But more notably, DuVernay revealed that she’s been paying attention to the fan casts that have sprung up in the wake of her hiring in 2018.

Since you asked so nicely. Working on the script with @TomKingTK and dreaming of actors. Seeing most of the incredible fan casting that’s going on. May in fact be taking some notes. xo https://t.co/4aIPXrmjHs pic.twitter.com/NtybLesLd6

Over the past year, DuVernay has droped hints about which characters from the New Gods pantheon will appear in her film. Last summer, she confirmed that the Female Furies, including Big Barda, will be included. Fans can also expect to see Darkseid as the main villain. And since King is co-writing the screenplay, it’s a safe bet that Mister Miracle will have a role as well. King and artist Mitch Gerads’ Mister Miracle series was one of the best comics of 2018. So it makes sense that he would try to recreate some of that magic on the big screen.

Some of the fan casting for Darkseid has included Idris Elba, Ian McShane, Ron Perlman, and Ving Rhames. Meanwhile, other fans have nominated everyone from Michael B. Jordan to Oscar Isaac to play Mister Miracle. However, Game of Thrones’ Gwendoline Christie seems to be the most popular pick for Big Barda.

New Gods is still without a release date. Who do you think DuVernay should cast in the film? Let us know in the comment section below!