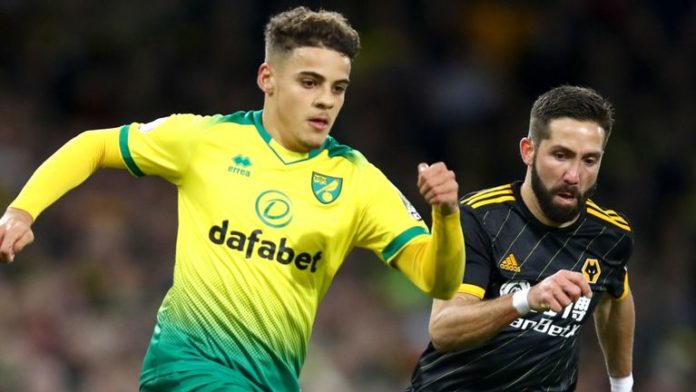 Farke’s former club Borussia Dortmund have been added to a growing list of admirers for the right-back, who has impressed in his first season in the Premier League.

Tottenham, Arsenal, Everton and West Ham have all shown an interest in the 20-year-old, as have Bundesliga side RB Leipzig.

Asked if there was any chance of Aarons leaving in January, Farke said: “No potential, and I wouldn’t spend too much energy listening to all these rumours.

“Max is a young guy and he still has four-and-a-half years of his contract left. I think it’s not the right time for him to even think about a move.

“I would also be doubtful when too many clubs are linked with him. He is totally at the right place here, he’s played nearly 20 Premier League games, now leave him alone and let him play some football.”

Farke is keen to add to his attacking options this month and the club are in talks to sign Slovakia international midfielder Ondrej Duda on loan from Hertha Berlin for the rest of the season.

“We know this player and he is a good player but let’s see how the next days and weeks develop,” Farke said. “One thing is for sure, we won’t fall asleep and we’re looking to strengthen our squad.

“A few players have left us [Dennis Srbeny, Patrick Roberts and Philip Heise] in recent days so that means we are working with a pretty small group of players.

“Of course, there are some possibilities where we are looking to strengthen, especially in the offence. I think we need a few more options, without a doubt.”

‘No Pukki, but we’ll try to be protagonists’

Farke could name 18-year-old Adam Idah in the starting line-up for the second successive game. The Republic of Ireland Under-21 international scored a hat-trick in their 4-2 FA Cup win at Preston.

Asked what we wants to see from his players at Old Trafford, Farke replied: “Bravery, and sticking to our philosophy and principles.

“We want to be ourselves and not be too impressed with the atmosphere at Old Trafford, the name of the club or the players.

“They have world-class players but we will try to be the protagonists on the pitch and to play football with courage and confidence.

“I expect a highly-motivated Manchester United team and it is not a secret that they should beat a newly-promoted side at home but I wouldn’t over-interpret that they could be nervous or anything like that.

“They have so much experience and I don’t think they will struggle.”