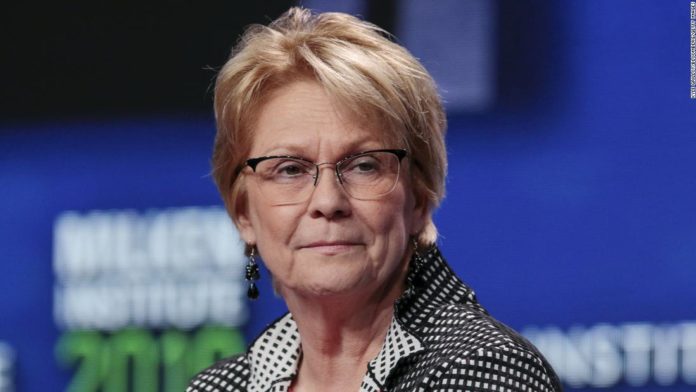 The CEO of Occidental Petroleum and the first woman to lead a major American energy company, Hollub had her eye on the Permian Basin — the most prolific oil field in the United States. If she could buy rival Anadarko Petroleum, which held prized drilling rights in the area, Occidental would become the leading producer at the epicenter of America’s shale oil boom.
But a major hurdle stood in her way: Hollub would first have to outbid Chevron (CVX), an oil company five times larger than hers.
A quick stop in Nebraska held the key. Legendary investor Warren Buffett endorsed Hollub’s hostile takeover of Anadarko Petroleum. The Oracle of Omaha pledged $10 billion in financing, giving Hollub the firepower needed to sweeten her bid.
The endorsement from Buffett was no small feat. The Berkshire Hathaway (BRKA) CEO generally avoids getting in the middle of hostile takeovers.
But Hollub knew she had to be aggressive. Two days before her Omaha summit with Buffett, Hollub took an even bolder step: She went to Paris to secure an $8.8 billion deal to sell Anadarko’s liquefied natural gas assets in Mozambique to France’s Total. Keep in mind, Occidental hadn’t even made a public offer for Anadarko yet.
The episodes show how determined Hollub was to control Anadarko, even in the face of sharp criticism from shareholders and analysts.
Yet the victory came at a considerable cost. Occidental’s (OXY) stock price crumbled. Its balance sheet added a crushing amount of debt. The company’s reputation took a hit and Hollub’s admittedly “very limited” dealmaking credentials were questioned, with billionaire Carl Icahn claiming Buffett “took her to the cleaners” by receiving terms that were far too generous. Icahn also accused Hollub of making a hasty deal to avoid a takeover of Occidental itself. This week, the company announced layoffs to meet its financial goals.
Related: See the 20 Risk Takers pushing global business forward
By swallowing up Anadarko, Occidental would become so large that it couldn’t be taken over by a mega oil company like ExxonMobil (XOM).
For better or worse, the Anadarko deal will define Hollub’s legacy — and the trajectory of Occidental.

Second-biggest US oil takeover in history

It remains an open question whether Occidental truly won the war. Valued at $58 billion including debt, the Anadarko acquisition is the second-biggest takeover on record by a US oil-and-gas company, according to Dealogic. Any deal of that size is inherently risky.
Even supporters of the transaction have serious reservations.
“It will work out in the long run. But I wish they did not do it,” said Pavel Molchanov, an energy-industry analyst at Raymond James. “It caused too much damage to the stock and to the reputation of the company.”
Occidental’s stock fell 40% from the time the deal was announced through early December, and since then, has only just begun to recoup some of those losses.
Now, much will depend on where oil prices go over the next five to ten years — a trend that is infamously difficult to forecast. No one knows with certainty which way oil prices will head, especially amid rapidly-evolving tensions between the United States and Iran, or if the American economy flirts with a recession.
US oil prices cruised above $100 a barrel as recently as 2014. Barely 18 months later, crude crashed to $26, plunging dozens of American oil companies into bankruptcy and wiping out hundreds of thousands of jobs. That turbulence has continued more recently, with US oil prices sinking into three bear markets just since the start of 2017.
“If oil prices collapse and stay low for five years, [the Anadarko buy] will look like a bad decision,” said Amy Jaffe, a senior fellow for energy and the environment at the Council on Foreign Relations. “But if oil prices stay here it will be a good decision, because size matters.”
Occidental insists it can weather the next oil storm because of its superior technology, which is highly regarded throughout the industry. The company’s proprietary drilling techniques allow it to pump oil more cheaply than its rivals.

A potential hidden ‘pot of gold’

Hollub, who has spent her entire 35-year career at Occidental, is betting that bringing this “secret sauce” to Anadarko will extract vast amounts of value.
“We’ll get more out of those assets than any of our competitors,” Hollub said during Occidental’s annual shareholder meeting in May.
Occidental believes there is substantial value in Anadarko that others, including Chevron, weren’t willing to pay up for.
“Vicki and her team saw an enormous pot of gold in the middle of Anadarko’s assets that Wall Street analysts didn’t see,” said Julio Friedmann, senior research scholar at the Center for Global Energy Policy at Columbia University, adding that the hidden value is likely in the Permian Basin. “That pot of gold will either be there or not.”
Friedmann said Occidental’s “track record in excellence,” including low-drilling costs and top-tier efficiencies, will make this deal a winner.
“She sees value in the rocks,” he said. “I would be reluctant to bet against them.”
Icahn, on the other hand, is much more skeptical. The legendary corporate raider slammed Hollub for the generous terms afforded to Buffett in exchange for his support. Occidental granted Buffett warrants to purchase up to 80 million shares of common stock. And the preferred stock pays a generous dividend of 8% per year.
“She gave him a gift,” Icahn told CNN Business in July as he launched a proxy war to replace four Occidental directors. “The whole thing is a travesty.”
In a letter to shareholders, Icahn said the Buffett deal “was like taking candy from a baby.”
The billionaire investor escalated his battle against Occidental in November by pushing to replace the company’s entire board of directors, including Hollub.

Jaffe, the CFR fellow, suggested there is an element of sexism in the criticism of Hollub.
“In my heart I believe this is an industry where risk-taking is rewarded,” said Jaffe. “If she was T. Boone Pickens, we would all be praising his risk-taking.”
Hollub, who in April 2016 became the first woman to be CEO of a major oil company, has acknowledged the difficulty of breaking into a male-dominated industry. But Hollub’s passion for college football helped her make inroads, she said.
“I knew just about every statistic there was for any time playing in the SEC,” Hollub said during a conference in April, referring to the Southeastern Conference in which her alma mater, the University of Alabama, plays. “I had a way of talking to and connecting to the men.”
Nonetheless, analysts and institutional shareholders have shared Icahn’s criticism of the deal with Buffett, who has a long history of extracting a high price for his endorsement.
“It was expensive. Nothing Warren Buffett does come cheap. We’ve known that for a long time,” said Molchanov, the Raymond James analyst.

The burden of debt

The Anadarko takeover adds about $40 billion in debt to Occidental’s balance sheet, according to Moody’s. That is a large amount of debt for a company the size of Occidental, especially if the US economy stumbles into a recession in the near future.
“Our concern is that the financial flexibility of this company is now somewhat compromised by the amount of debt that was incurred,” Andrew Brooks, vice president at Moody’s. “They’ve got to address the debt levels.”
Hollub has not ignored these concerns.
She has vowed to repair Occidental’s balance sheet by unloading $15 billion of assets and using the proceeds for debt repayment. Occidental has already reached deals to sell roughly $10 billion of Anadarko’s businesses, including an $8.8 billion sale announced in May of Anadarko’s liquefied natural gas assets in Africa to France’s Total.
And this week Occidental said it has determined that layoffs are “necessary” to hit the financial goals it set in the Anadarko deal. Occidental did not say how many jobs will be cut.
Still, in August Moody’s took the rare step of downgrading Occidental’s credit rating by three notches, leaving it one rung above junk status.
“That’s a pretty unprecedented move,” said Brooks, vice president at Moody’s. “Debt reduction is paramount.”
It will take years to deliver the final verdict on the Anadarko deal—and Hollub’s legacy. Even then, it won’t be decided by the likes of Icahn or Wall Street analysts, but by the whims of the notoriously boom-to-bust oil market.