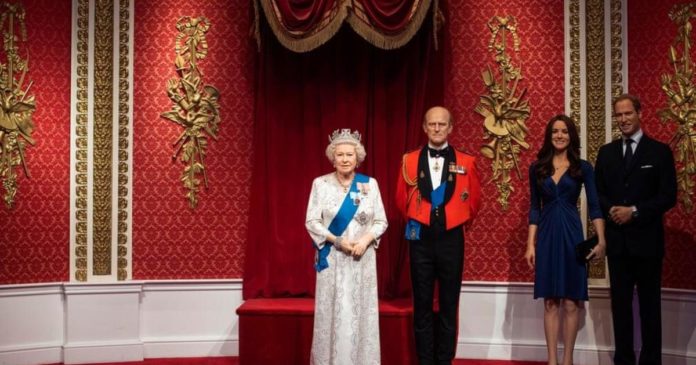 Prince Harry and Meghan Markle’s decision to take a step back from senior royal duties has prompted London’s Madame Tussauds to make some changes of their own.

Less than a day after the couple’s announcement was made, the famous waxwork museum has decided to remove the Duke and Duchess of Sussex from its royal family display, “to mirror their ‘progressive new role within the Royal institution.'”

“We’ve got to respect their wishes #Megxit,” the wax museum tweeted Thursday.

“Alongside the rest of the world, we are reacting to the surprising news that the Duke and Duchess of Sussex will be stepping back as senior royals,” Steve Davies, General Manager at Madame Tussauds London, said in a statement. “From today, Meghan and Harry’s figures will no longer appear in our Royal Family set.”

That means they will no longer stand next to the figures of Queen Elizabeth II, Prince Philip, Prince William and Kate Middleton.

Harry’s wax figure was first launched in 2014 to mark his 30th birthday, while Meghan’s figure was added to the collection in 2018, the year of the royal wedding. The duo is dressed in replica outfits from the announcement of their engagement.

Madame Tussauds in New York City will be moving the couple to another area.

“Our experiences bring iconic moments to life; to reflect the announcement we will be moving the popular figures to another area in the attraction upon their return to Madame Tussauds New York,” Brittany Williams, spokesperson for the New York museum, said in a statement to Entertainment Tonight.

“We look forward to spending more time with the couple in North America and we will continue to watch to see what the next chapter holds for them.”

The announcement of Meghan Markle and Prince Harry’s split from their royal duties has dominated newspapers in Britain since they shared their decision Wednesday. Tabloids there have coined the name “Megxit” to describe their decision to step away from their roles as “senior” members of the royal family.

After announcing the news, the couple launched a new website, sussexroyal.com, to detail their next steps.

“We now plan to balance our time between the United Kingdom and North America,” they said in a statement. “This geographic balance will enable us to raise our son with an appreciation for the royal tradition into which he was born, while also providing our family with the space to focus on the next chapter, including the launch of our new charitable entity.”

Soon after, Buckingham Palace issued a statement saying “discussions with The Duke and Duchess of Sussex are at an early stage. We understand their desire to take a different approach, but these are complicated issues that will take time to work through.”