Home Culture Will Smith calls one role he turned down the ‘one that got... 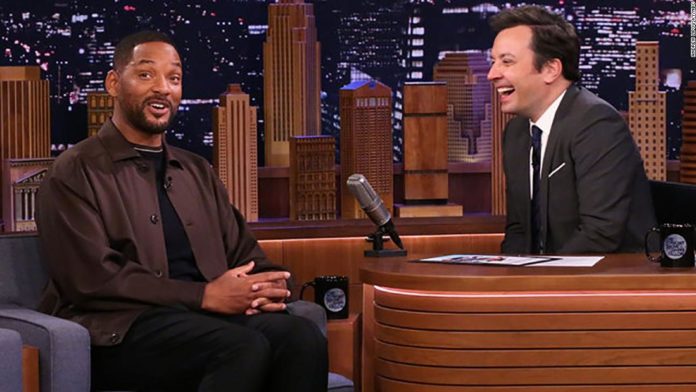 Smith rapped “The History of Will Smith,” covering everything from “The Fresh Prince of Bel-Air” to “Independence Day,” and much more on Thursday.
“You seen him in Billboard, starring in shows,” Fallon starts their performance. “But there’s a lot about him that you might not know.”
The two went back and forth, with Smith rapping “Six whole years I lived with the Banks/So if you can dance the Carlton, I still give thanks/But a real big star needs a real big screen/So I had to spread my wings, if you know what I mean.”
He adds, “When you hear the siren noise/Me and Martin, a couple of Bad Boys/Independence Day, aliens on my turf/You invading us? Nah, ‘Welcome to Earth.'”
When he sat down with Fallon, Smith said rapping the song made him realize he’s had a great career.
“As we were going through, I was kinda like, ‘Wow, that was kinda [great],'” he said. “I had a nice little run.”
And not many regrets, he says, except maybe a few role that he called the “ones that got away.” One, in particular he named.
“For me, Neo,” he said. “I had ‘The Matrix’ first. Yeah, yeah, yeah.”
He revealed that Val Kilmer was originally “going to be Morpheus,” which ended up going to Laurence Fishburne in the franchise.
“It was better this way, if I was Neo Morpheus wouldn’t have been black,” Smith added.
He also revealed that his role in “Bad Boys,” alongside Martin Lawrence, almost went to “Saturday Night Live” alum Dana Carvey.
Smith was there to promote his new movie, “Bad Boys For Life,” in theaters January 17.