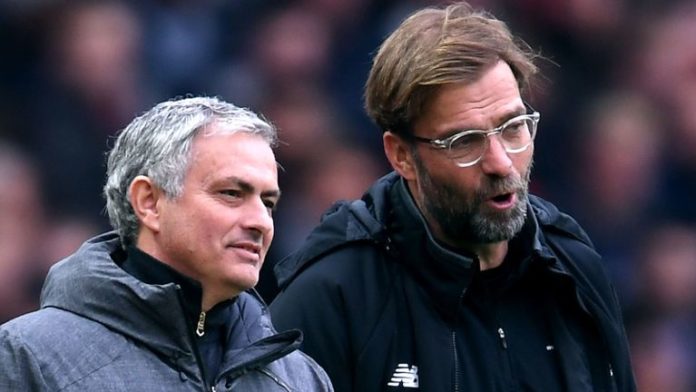 Given the circumstances, Liverpool is the last team Mourinho would want to take on next.

Last week, he called the Reds the best team in the world in this moment, and highlighted the benefits of Liverpool letting Jurgen Klopp have eight transfer windows to put down his philosophies, his training methods, his fingerprints.

Mourinho was a picture of smugness after his Manchester United team kept Liverpool scoreless at Anfield with 35 per cent possession in October 2016, while his patched-up Chelsea team beat Liverpool in April 2014 in a result that ruined the Reds bid to win the Premier League title.

How he would love to be the manager to end Liverpool’s unbeaten record this season, however unlikely that seems. Sky Sports looks back at 10 battles over the years.

Mourinho’s quest to stall Liverpool’s seemingly unstoppable march towards the Premier League title is the highlight of this weekend’s top-flight games – but it was a far different story in autumn 2004.

Joe Cole emerged from the substitutes’ bench to keep Chelsea in touch with leaders Arsenal in Mourinho’s first encounter with Liverpool.

Cole replaced Didier Drogba late in the first half and on 64 minutes, it was his header that beat Chris Kirkland from Frank Lampard’s in-swinging free kick.

A first piece of silverware

John Arne Riise scored after just 45 seconds but Chelsea equalised on 79 minutes through an own goal by Steven Gerrard and the Blues sealed the win in extra time.

Mourinho was sent off for putting his finger to his lips to hush the Liverpool fans, but the Special One had his first medal on these shores in his back pocket.

Milan Baros beat Petr Cech to a loose ball and Luis Garcia tapped in, despite Chelsea claiming it did not cross the line.

Speaking on the game last year, Mourinho told BeIn Sports: “Anfield is a magic place to play, it is a beautiful place to play. They can even score goals that the players don’t score, like it happened in 2005.

For the second successive season, Rafael Benitez got the better of Mourinho in the semi-final of a major competition.

Drogba would finally beat Pepe Reina to reduce the arrears, but after Joe Cole blazed over a golden opportunity to take the tie into extra time, Liverpool booked their place in the final.

The Champions League remained the only major trophy that had eluded Mourinho at Chelsea and his team suffered a second elimination at the hands of Liverpool at the semi-final stage in May 2007.

The 4-1 shootout loss would prove significant, coming in the middle of a breakdown in relationship with Roman Abramovich over the club’s transfer strategy.

The Chelsea owner, frustrated in his desire for European glory, would sack Mourinho four months later with Chelsea lying in fifth place.

Unshaven and dressed in tracksuit and gilet, Mourinho derailed Liverpool’s Premier League title tilt with a team full of reserves.

In the previous January, he had criticised West Ham using “19th Century” tactics, but the Portuguese brought to Merseyside his own unique brand of defensive football as Chelsea slowed the game at every opportunity.

Mourinho made seven changes, with the Champions League once more the club’s primary objective, but they were given a helping hand as Steven Gerrard’s slip allowed Demba Ba to open the scoring.

Willian then made sure of the win after a pass from fellow substitute Fernando Torres for a breakaway goal in injury time.

“There was probably two buses parked today, rather than one,” Liverpool boss Brendan Rodgers reflected after suffering a hammer blow to their hopes of landing a first Premier League title.

Another step to cup success

Branislav Ivanovic’s extra-time goal was enough to secure Chelsea’s place in the Capital One Cup final as they beat Liverpool 1-0 on the night and 2-1 on aggregate.

Chelsea were lucky to keep their full complement of players on the pitch after Diego Costa appeared to stamp on Emre Can in the first half.

However, referee Michael Oliver was unmoved just as he was when Mourinho’s side thought they should have had a penalty after Martin Skrtel’s challenge on Costa midway through the first half.

Two goals from Philippe Coutinho and a late strike from Christian Benteke cancelled out Ramires’ opening goal as Liverpool won their first game in the Premier League under the German.

The defeat consigned Chelsea to their worst start to a league season since 1978/79 with Mourinho losing nine of his last 17 games in all competitions compared to just four defeats in 54 games the previous season.

Jose squeezes Klopp out of second

Mourinho went on record to say that finishing in second place with Manchester United was among his greatest achievements as a manager, and that ‘success’ in 2018 was aided by a 2-1 victory over Klopp’s side in March.

Marcus Rashford scored twice to inspire Manchester United to a crucial victory over rivals Liverpool at Old Trafford – a first since January 2016.

Mourinho’s men extended their unbeaten league run against Liverpool to eight games and opened up a five-point lead over Klopp’s side in the race for second.

“Is it a perfect result? Yes,” crowed Mourinho afterwards. “Three points is very important. I wouldn’t go so far as saying it was a perfect performance. In the first half, the game gave us the opportunity to be direct, fast and score goals, more than we did.”

Klopp brings curtain down on Jose

Xherdan Shaqiri came off the bench and scored twice as Liverpool returned to the top of the Premier League with a 3-1 win over Manchester United at Anfield.

Liverpool hammered their old foes, producing 36 attempts on goal – the most by any team in the Premier League that season. United were left languishing in sixth, 19 points off the leaders and closer in terms of points to the relegation zone.

Speaking after the loss, Gary Neville said: “I’m in shock. Liverpool were streets ahead of United, absolutely streets ahead. United were awful today. They haven’t got anyone in midfield that can pass a ball. Not one of them.

“They were hanging in there for a bit but the only real team who were going to win the game was Liverpool. It’s not good enough.” Two days later, Mourinho was sacked.

Tottenham vs Liverpool is live on Saturday Night Football from 5pm; kick-off 5.30pm. Sky Sports customers can watch in-game clips in the live match blog on the Sky Sports website and app.