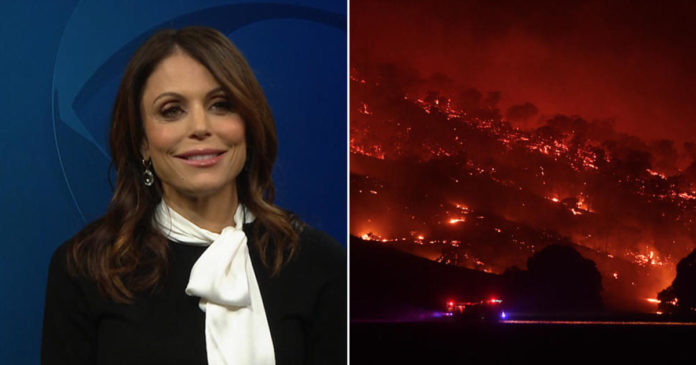 Entrepreneur and reality TV star Bethenny Frankel was one of the first civilians to send a plane filled with aid to Puerto Rico after Hurricane Maria in 2017. From this mission, her bstrong Foundation was formed.

Since then, Frankel and bstrong have responded to several natural disasters, including volcanic eruptions in Hawaii and Guatemala, hurricanes in Mexico and the Caribbean, and now, the wildfires in Australia.

Millions of acres have burned since September, destroying thousands of homes and killing at least 25 people. In addition, wildlife experts estimate more than 1 billion animals have been killed by the unprecedented fires spreading across the continent. Aid has started pouring in from around the world.

Earlier this week, Frankel wrote on Instagram that her team was in “strategy mode with a plan to effectively and efficiently aid Australia in this crisis.” She sat down with CBSN to discuss the plans.

“The first phase to the bstrong initiative in Australia was to be organized,” Frankel said. “It’s such a crisis, it’s such a devastation, it’s so urgent … but before we started to ask people for money, we had to have a really, really clear-cut, multi-tiered plan.”

bstrong has turned into a major philanthropic endeavor for the entrepreneur, who runs the foundation the way she does her businesses. “Like anything else, you have to work smart. You have to be efficient,” she said. Frankel wants donors to know that 100% of the money bstrong receives during this time will go toward fighting the Australian wildfires.

While she said her team is still in the “hunting and gathering” phase of their mission, the ultimate goal is to send American firefighters to Australia.

“We’re working on airline partners. We’ve talked to Quantas, we’ve talked to United, which seemed very interested in helping and they were generous enough to help Ellen [DeGeneres],” she said. “That would be wonderful. For an American airline to help us, like United, would be beautiful.”

On Friday she said on her Instagram stories that she was currently in talks with United Airlines as a potential partner.

Frankel told CBS News that U.S. firefighters are currently coordinating with Australian firefighters, and her foundation will hopefully be able to fly these volunteers, along with donated supplies, to Australia within the next few days. “Ultimately, hundreds of firefighters [will] rotate in and out of Australia,” she said.

bstrong and one of its partners, Global Empowerment Mission (GEM), have a warehouse in Miami where they store emergency supplies, ready to deploy during the next disaster. Because of this location, the organizations have strong ties to Miami firefighters, Frankel said.

“We have big Florida firefighter connections,” she said. “We can get a really strong commitment from the Florida firefighters, particularly Miami.” Frankel said they have also received interest from fire departments across the U.S., who offered to donate surplus gear.

According to the foundation’s website, bstrong is maintaining several ongoing relief missions. As with their missions in the Amazon and Caribbean, the disaster in Australia is ongoing — and Frankel says bstrong will be present until the job is done.

“There are people who have no antiseptic, no power, no generators, they have no dignity. They really have lost everything,” she said. “So we will help animals, we will help people in shelters and eventually give them cash cards. And we will stay long after the headlines fade and help with the rebuild.”

Frankel, who is the founder and CEO of the lifestyle brand Skinny Girl, has businesses in several industries, from alcohol to publishing to investing and reality TV. She said, however, that bstrong has changed her life.

“I’m more aware of what’s going on in the world. … When people are having a really hard time and have experienced the lowest in their life and lost everything, I see that,” she said. “I look at my daughter [9-year-old Bryn] and I see her blessed life differently.”

“It’s amazing to know how much you can make a difference,” she added. “It’s magical. It’s contagious.”