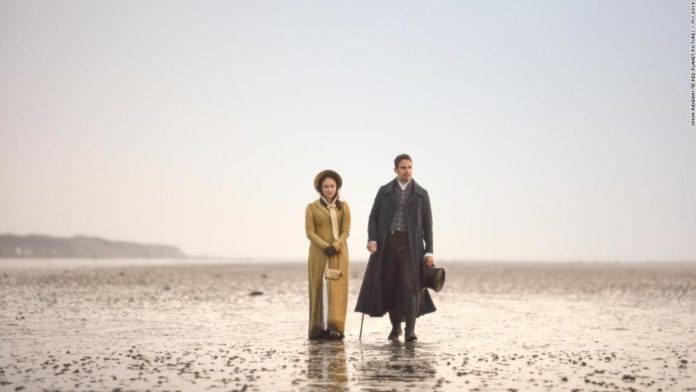 Written and updated by Andrew Davies — whose credits include “Bridget Jones’s Diary” and four direct Austen adaptations, among them the 1990s TV version of “Pride and Prejudice” — “Sanditon” transforms the writer’s 11-chapter fragment, written shortly before her death in 1817, into a full-blooded drama, with bodice-ripping, blackmail and even a bout of nude swimming.
While purists might be taken aback at first, as University of York lecturer Hannah Greig told The Atlantic, the bones of the story “feels like the beginning of a different kind of Austen novel,” and the miniseries joins a roster of projects that have sought to revisit Austen in a more contemporary way.
As “Sanditon” progresses, it becomes easier to accept its juicier flourishes as the kind in which Austen herself might have indulged, arguably, if she was still plying her trade now.
The premise is pure Austen, as the wide-eyed but clear-headed Charlotte Heywood (Rose Williams) has a chance encounter with Tom Parker (Kris Marshall), who is en route to the seaside village of the title, which he hopes to turn into a fashionable tourist health resort.
Charlotte proceeds to join Tom and his wife (Kate Ashfield), and is quickly whisked into a world of intrigue, much of it surrounding Lady Denham (“Years and Years'” Anne Reid, wonderfully snooty), whose patronage Tom needs, and whose wealth is sought by an assortment of scheming potential heirs.
Charlotte, meanwhile, meets Tom’s dashing brother Sidney (Theo James), who smolders with the best of them, and initially doesn’t like her very much; and the somewhat mysterious Miss Lambe (Crystal Clarke), an heiress of West Indian descent who brings a woman of color into the mix, with Sidney serving as her stern guardian.
That barely scratches the surfaces of the cast of characters, and there’s an element of “Downton Abbey” (where James had a notable cameo) baked into the project’s appeal. The suspense surrounds not only who will wind up with whom — complicated by a few whiffs of forbidden romance — but also the future of Lady Denham’s estate, and the tensions between the town’s workers and its privileged class.
“Sanditon” features all the customary lavish period trappings the “Masterpiece”/Austen pairing demands, but also plays with conventions and expectations. While nothing has been said as yet regarding a follow-up, in success, there certainly appears to be room for a trip back to this locale.
PBS periodically faces questions about its viability in the new digital world, especially with so many content-hungry commercial networks and streaming services providing US homes for high-class British dramas.
“Sanditon,” however, falls squarely into the “Masterpiece” wheelhouse, and once people with a taste for such fare get a taste of its sumptuous amenities, one suspects they’ll be in no hurry to check out.
“Sanditon” premieres Jan. 12 at 9 p.m. on PBS.