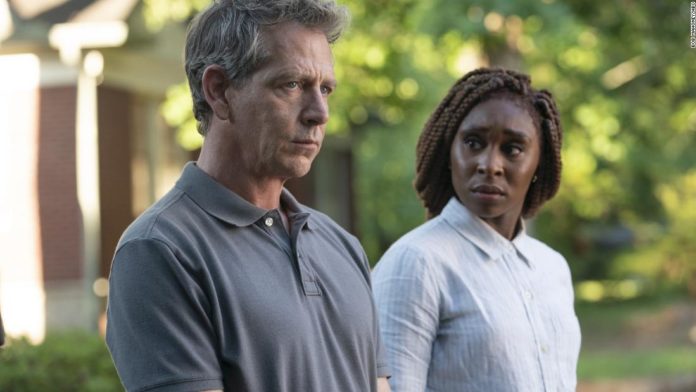 Like many of King’s works, this one begins with a horrific crime, one involving the murder of a child. Investigated by a local detective, Ralph Anderson (Ben Mendelsohn), the evidence seems clear at first, pointing toward Little League coach Terry Maitland (Jason Bateman), an unlikely perpetrator given his strong ties in the community.
Soon, however, there are conflicting signs, and what looks like an airtight alibi. That there could be some supernatural explanation for all this only gradually comes into view, with the arrival in a later episode of Holly Gibney (Cynthia Erivo), an unorthodox investigator who is open to all manner of possibilities, including the eerie parallels between the case at hand and other ostensibly unrelated ones in far-flung locales.
“Do you see how strange this is?” Ralph asks, despite being initially resistant to any explanation that doesn’t conform with old-fashioned police work.
Bateman and Mendelsohn double as producers on the project, and the former directed the first few episodes. The cast is exceptional, including Julianne Nicholson as Terry’s confused wife, “The Night Of” alum Bill Camp as his attorney and Mare Winningham as Ralph’s spouse.
Still, much of the credit here belongs to Price, who wrote the first five chapters, deftly beginning with a story that appears rooted in reality before gradually peeling back layers — in exceptionally creepy fashion — that suggest a more unsettling force at play.
HBO made six of the 10 episodes available, so the one disclaimer would be that King miniseries (and for that matter movies) have a way of starting out well and falling apart as they near the finish line. As is, while the pacing is fine, it might have gained a bit in the tightened focus that would have come from seven or eight parts as opposed to 10.
Still, that amounts to a quibble, with a limited series that King — who often takes an arm’s-length posture toward adaptations of his books for which he’s not directly responsible — has publicly endorsed, calling it “riveting.”
“You can’t catch murder,” it’s noted at one point. “It’s not a virus.”
Perhaps not, but watching “The Outsider,” that experience, at least, quickly becomes pretty contagious.
“The Outsider” premieres Jan. 12 at 9 p.m. on HBO. Like CNN, the network is a unit of WarnerMedia.