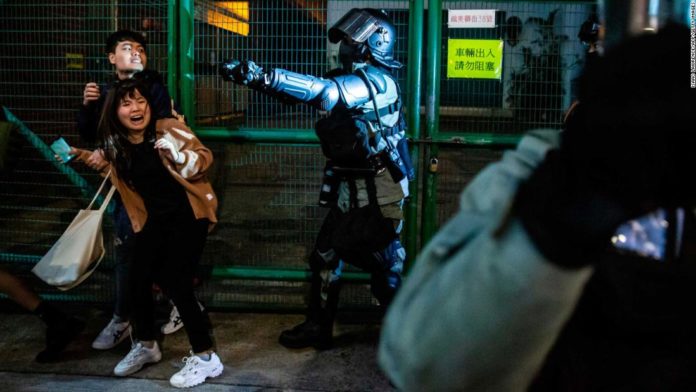 Researchers from the University of Hong Kong surveyed 18,000 people between 2009 and 2019 in what they said was the world’s largest and longest study of the population-wide impact of social unrest on mental health.
Of those surveyed, 32% reported signs of PTSD in recent months, according to the researchers. PTSD is an anxiety disorder that manifests after a traumatic experience and can cause sleeplessness, irritability and traumatic nightmares.
Protests erupted in Hong Kong in June over a now-scrapped extradition bill that would have allowed suspects to be sent to mainland China. The demonstrations have since evolved into a broader pro-democracy movement calling for greater civil liberties and police accountability.
As the protests have continued, they have grown more violent and disruptive. Two protesters have been shot with live rounds, a man was set on fire, and another man died after being hit with a brick during clashes. More than 16,000 rounds of tear gas have been fired by police, with about 7,000 people arrested.
Of Hong Kong’s 7.5 million population, 6.3 million are adults. Compared to 2009, when the research began, the study found there are now an estimated 1.9 million more adults in the city with PTSD symptoms, and 590,000 more with probable depression.
“Hong Kong is under-resourced to deal with this excess mental health burden,” Professor Gabriel Leung from the University of Hong Kong, who co-led the research, said in statement.
“With only around half the per-capita psychiatry capacity of the UK, and pre-existing average public sector outpatient waiting times of up to 64 weeks, it is important that we enhance mental health and social care provision so that all those in need are able to access high-quality services.”
According to the study, the prevalence of PTSD symptoms in the adult population was six times higher in 2019 than after the city’s so-called Umbrella Movement — a 79-day, largely peaceful civil disobedience campaign calling for universal suffrage — rising from about 5% in March 2015 to nearly 32% in September to November 2019.
They acknowledged that their findings provide observational associations rather than prove any cause and effect. They also warned that their findings may underestimate the extent of mental health problems because they did not include individuals younger than 18, who make up a substantial proportion of protesters.