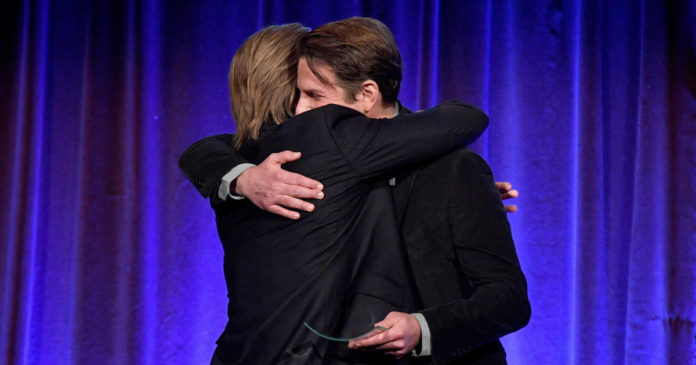 When Brad Pitt accepted an award at the National Board of Review gala earlier this week, he revealed a personal side of himself few get to see. The actor hugged Bradley Cooper, who presented him with the award, then danced — literally — over the podium and told the audience Cooper helped him get sober.

“Bradley just put his daughter to bed and then rushed over to do this, he’s a sweetheart,” Pitt said as he accepted the Best Supporting Actor award for his role in Quentin Tarantino’s “Once Upon a Time in Hollywood.”

“I got sober because of this guy and every day has been happier since,” he continued, the audience erupting in applause.

The 56-year-old actor’s acceptance speech then took a lighthearted turn. “It’s nice to leave this [gala] carrying something other than George Clooney,” he joked.

“I know very little about the National Board of Review,” he quipped. The organization, founded in 1909, reviews films during what’s known as awards season and then choses the top films of the year, handing out prizes during their annual gala.

“I started to Google you and look you up and I thought ‘f*** it, I like films, too. That’s good enough for me,'” Pitt continued to joke. He then delved into his love of films since he was a child, giving the public a glimpse into the real man often at the center of tabloid headlines.

In May 2017, Pitt shared with GQ magazine that he had quit drinking alcohol. Now, he’s revealing a bit more about his path toward sobriety — and the pal who helped him get there.

Cooper, who has been alcohol free since 2004, told The Hollywood Reporter in 2012 that it was incidents of self-harm that made him want to stop drinking. “I was at a party, and deliberately bashed my head on the concrete floor,” he said in the interview, according to Entertainment Tonight. “And then I did it again. I spent the night at St. Vincent’s Hospital with a sock of ice, waiting for them to stitch me up.”

“I don’t drink or do drugs anymore,” he said. “I realized I wasn’t going to live up to my potential, and that scared the hell out of me. I thought, ‘Wow, I’m actually gonna ruin my life. I’m really gonna ruin it.'”