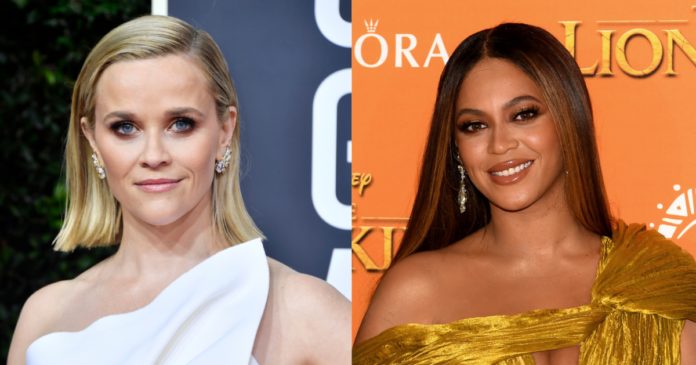 Reese Witherspoon can raise a toast this weekend with some high-end bubbly thanks to Beyoncé, Jay-Z and a little bit of courage.

“I just got home from New York and the most beautiful flowers are here and a case of Ace of Spades champagne,” Witherspoon shared on her Instagram Stories. A note with the gift read, “More water from Jay & Bey.”

It started with an encounter at last Sunday’s Golden Globes ceremony when Witherspoon’s table ran out of water. She thought it was only natural to ask the “Drunk in Love” couple for a champagne refill — and her bold move paid off.

The couple surprised the actress with a case of Armand de Brignac “Ace of Spades” champagne. Jay-Z has owned the luxury brand since 2014.

“It’s 11:30. We’re drinking champagne,” Witherspoon said as she popped open a gold bottle with her mom, Betty, who asked whether it was too early to drink.

“Who cares? It’s from Jay-Z and Beyoncé,” the actress responded.

Earlier this week, Jennifer Aniston, her co-star on the Apple TV+ series “The Morning Show,” took to Instagram to share the behind-the-scenes moment. “Reese!? This is one of the many reasons I love you,” she wrote on Instagram Stories. “We ran out of water at our table so naturally, she asked Jay Z and Beyoncé for a glass of their champagne.”

Aniston also shared a photo of drinking a glass of the champagne that Jay-Z and Beyoncé brought to the awards ceremony, and tagged Beyoncé.

Beyoncé was nominated for the Golden Globe for Best Original Song for her track, “Spirit,” from “The Lion King” — but she lost out to Elton John.