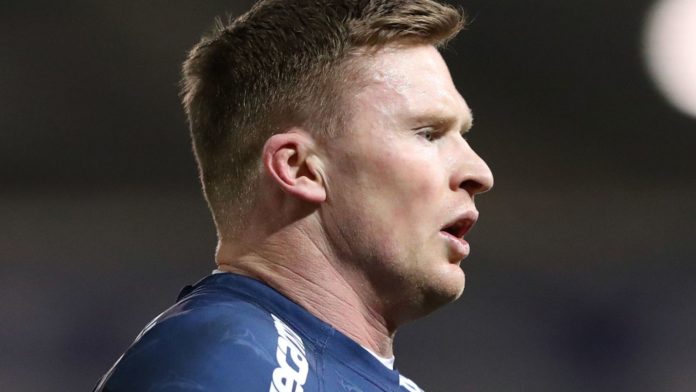 Sale fell to a third successive Champions Cup defeat as La Rochelle came from behind to claim a 30-23 victory.

Tries from Tevita Railevu, Tawera Kerr-Barlow, Geoffrey Doumayrou and Gregory Alldritt, along with 10 points from the boot of Ihaia West, secured a bonus-point win for the hosts.

Du Preez opened the scoring for Sale after seven minutes as he powered over the line from short range after a period of sustained pressure by the visitors, with MacGinty adding the extras.

Sale kept building the pressure and La Rochelle were temporarily reduced to 14 men when blindside flanker Kevin Gourdon was sent to the sin bin for a deliberate knock-on.

MacGinty kicked a further three points to extend Sale’s lead to 10 points but La Rochelle hit back with two tries in the space of three minutes.

Former All Blacks scrum-half Kerr-Barlow put in a speculative up-and-under which was gathered by Levani Botia, who was brought down five metres short of the try line. The ball was recycled and put through the hands with a well-timed pass from Doumayrou putting Railevu over at the corner.

Sale were immediately back on the attack but a sloppy pass from Will Cliff was intercepted by Kerr-Barlow, who ran in unopposed from 40 metres out with West converting to put the hosts into the lead.

MacGinty and West exchanged three points before the Sale fly-half was forced off with a shoulder injury.

However, a long-range penalty from Williams meant Sale turned around with a 16-15 lead.

La Rochelle started the second half strongly and after a number of powerful carries, Kerr-Barlow raced clear before drawing his man to put Doumayrou over. West converted to give the hosts a 22-16 lead going into the final quarter.

Sale were struggling to cope with the pace and quality of Kerr-Barlow, with former England wing Chris Ashton’s frustration getting the better of him when he tackled the scrum-half without the ball after he had broken clear.

The race for the Champions Cup knockout stages hots up this weekend as some teams attempt to clinch home quarter-finals while others battle to remain in contention: https://t.co/sGJ0g3Kffy pic.twitter.com/Yg3BzGMA7W

Ashton’s indiscretion left referee Mike Adamson no choice but to award him a yellow card, which was punished by three points from the boot of West.

Things went from bad to worse for the visitors when replacement prop Valery Morozov was shown a red card due to driving his shoulder with force into the head of Lopeti Timani – but Timani was shown a yellow card after a neck roll on Morozov.

Alldritt claimed the try bonus point as he crossed at the far left-hand corner after a lovely pass from Brock James.

However, Sale refused to throw in the towel and a Langdon try from short range cut the home side’s advantage to seven points.