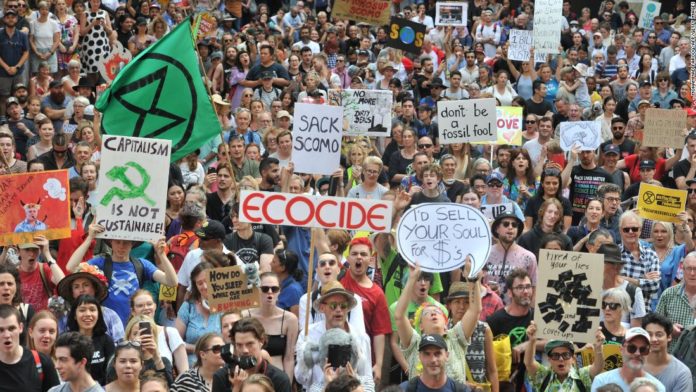 The protests, organized by national student organization Uni Students for Climate Justice, were set to take place in nine cities including Melbourne, Sydney, Brisbane and Perth, indicating widespread public discontent after months of increasingly deadly fires.
New South Wales police told CNN more than 30,000 people attended the climate change protest in Sydney. Organizers put the number between 50,000 and 60,000 people.
“The bushfires are devastating communities and our government is not doing enough to stop it,” Ambrose Hayes, 14, told CNN at a rally in Sydney. “The Morrison government needs to act before it’s too late, before we reach a tipping point, before these impacts get worse than they already are.”
Protesters carried signs that read “Koalas Not Coal,” “Change the System, Not the Climate” and “Sack ScoMo,” with many directing their anger at Prime Minister Scott Morrison, who has faced heavy criticism for what they see as a lackluster response to the fires and for his climate policies, as well as support for coal mines.
“We’ve had decades to deal with it and successive governments have done nothing. The Earth is a finite resource. You can’t have an economy on a dead planet,” said Kris Stevens, who traveled to Sydney from the city of Dubbo in New South Wales (NSW).
Friday’s protests pushed for five main demands: funding for firefighters, relief and aid for affected communities, land and water sovereignty for indigenous communities, an immediate transition toward renewable energy, and a “just transition” for workers in the fossil fuel industry.
A total of 27 people have died this fire season, around 2,000 homes have been destroyed and an estimated billion animals have been affected. State and federal authorities have been scrambling to respond, with thousands of firefighters on the ground and billions of dollars allocated in federal aid. But climate activists say it’s not enough.
“We’re protesting this Friday because we’re outraged about our government’s criminal negligence about the bushfire crisis, exacerbated by climate change,” said Uni Students for Climate Justice on its Facebook page. “We are protesting to give a voice to the tens of thousands of people who want real action on climate change and real funding for relief services.”
Authorities had urged protesters to postpone the marches due to dangerous fire conditions and limited resources. Victoria Police Acting Assistant Commissioner Tim Hansen said on Wednesday that the police force was already stretched thin and fatigued, and the protests would be a “distraction” and a “resource drain” on a day forecast to be hot and dangerous.
The organizers pushed back, posting on Facebook that the police, the media and the state government were “trying to paint ordinary people — who are fed up with their lies, theft and criminal negligence — as being a drain on emergency services.”

Morrison has faced growing anger and frustration from the public as the fires continue to spiral out of control.
He was widely criticized for taking a vacation to Hawaii as fires raged in NSW last month. During a visit last week to the fire-ravaged town of Cobargo, the Prime Minister was heckled by furious residents who had lost their homes. “You’re an idiot,” one resident shouted at him.
He has also been accused of initially playing down the severity of the fires.
“The strategy up until Christmas was to downplay importance of the emergency, to make it seem like another episode of fires … nothing to see here, move on,” said Frank Jotzo, Director of the Centre for Climate and Energy Policy at Australian National University’s Crawford School of Public Policy. “That really jarred with the very obvious never before seen dimensions of this disaster and it would really grate with anyone who had a direct experience of these fires.”
“The government has simply looked uncaring, and it looked like the political position of the government, including with regards to its position on climate change, seemed to be more important than even the acknowledgment of the magnitude of the disaster,” said Jotzo.
Morrison has defended his government’s response to the fires and set up a National Bushfire Recovery Agency to coordinate the response to rebuilding communities.
His administration has allocated 2 billion Australian dollars ($1.4 billion) in federal aid, to help rebuild vital infrastructure like schools and health facilities struck by fire.
The Prime Minister earlier said up to US$4,200 will go to each of the volunteer firefighters battling blazes for more than 10 days. Other relief measures include compensated pay and extra leave for volunteer firefighters. Cash payments of 1,000 Australian dollars ($690) are also available to those who have lost homes or loved ones in the fires.
The federal government has also sent in military assistance like army personnel, air force aircraft and navy cruisers for firefighting, evacuation, search and rescue, and clean-up efforts.
“The tone and nature has really changed over the last week or so. There is now a clear acknowledgment that it is the absolute top priority for the federal government in Australia,” said Jotzo.
Activists on Friday, however, said the recovery fund was “totally inadequate” and called for the fire service to be fully funded.
“It’s scandalous that we have to rely so heavily on volunteers and charity to stop whole towns from being wiped out! We demand full funding for our fire services,” Uni Students for Climate Justice said on Facebook.

Morrison has also been accused of not doing enough to address the climate crisis, which experts say is making natural disasters like fires go from bad to worse. Summers in Australia are always hot and dry — but fire seasons have been arriving earlier and spreading with greater intensity.
“The science is telling us … these extreme heat conditions we’ve seen this year might occur naturally once every 350 years,” said climate scientist and former federal climate commissioner Tim Flannery. “But once you add in the influence of the human-emitted greenhouse gases, we’re likely to see those conditions once every eight years.”
Flannery added that coal was “a national addiction,” and the link between government and the fossil fuel industry was “almost complete.”
Critics of the Morrison administration have pointed to his history of climate skepticism and support for coal mines. In 2017, Morrison — then treasurer — made his position clear when he brought a lump of coal into Parliament.
“This is coal. Don’t be afraid, don’t be scared,” he said, to jeers from the opposition. “It’s coal that has ensured for over 100 years that Australia has enjoyed an energy-competitive advantage that has delivered prosperity to Australian businesses.”
Since then, his climate rhetoric has softened a little — he has acknowledged the link between climate change and extreme weather, and asserted his commitment to reduce emissions. But he also said the government would only pursue “sensible” policies, and that there wasn’t “a single policy, whether it be climate or otherwise,” that can fully protect Australia against the fires.
Jotzo said climate change has been a “really poisonous issue politically for about a decade in Australia.”
“Morrison took a very decisive stance against climate change policy in the election campaign in 2019,” he said. “He was subsequently locked into a position by his government of not doing much on climate change.”
That policy of inaction is threatening to divide Australian society, said Flannery, “because people are deeply angered by the betrayal of one government after the other on this issue.”
“We have a significant minority of Australian parliamentarians who are welded-on climate skeptics. And even if the seas were lapping at their chins and their hair was on fire as a result of climate change, I don’t think they would change their mind,” he continued.
Anger over government inaction on the climate crisis was evident at the march in Sydney.
“This is unacceptable, we want our Prime Minister to listen to the youth. He hasn’t been listening to his voters. This is not what a Prime Minister should be doing,” said 14-year-old Hayes, who spoke at the rally.
Scientists have been warning for years that a disaster of this magnitude could happen, but government agencies failed to take heed and prepare, Jotzo said, adding that there is now enormous domestic and international pressure on the Australian government to make meaningful climate change policies.
“The fires are a wake up call to that, and I am optimistic that it will result in a real shake up in how we think about these extreme weather events,” he added.

The protests come as wildfires across Australia’s southern states were expected to worsen on Friday, as hot, dry winds gust into the area, New South Wales Rural Fire Service (NSW RFS) Commissioner Shane Fitzsimmons said in a press conference.
There were 137 fires burning in New South Wales as around 3,300 firefighters battled conditions that the fire service described as “difficult and erratic.”
On the border between Victoria and NSW, two fires — the Green Valley fire and Dunns Road fire — have connected, making a combined fire covering 545,785 hectares (1.3 million acres).
In Victoria, emergency fire warnings were in place for several areas, telling people to evacuate. The Victorian Country Fire Authority warned residents still in Combienbar town, “You are in danger and need to act immediately to survive. The safest option is to take shelter indoors immediately. It is too late to leave.”
Strong winds southwesterly winds of 70 to 100 kilometers per hour (43-62 miles per hour) were expected to hit the region overnight, complicating firefighting efforts.
“These next few hours are going to be very, very challenging,” Premier of Victoria Daniel Andrews said, according to CNN affiliate Nine News.

CNN’s Hilary Whiteman and Isaac Yee contributed to this report.