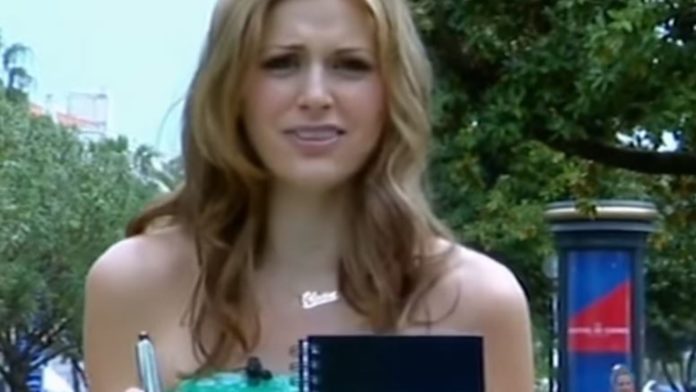 Olivia Lee was once the queen of prank TV, a woman unafraid to smile sweetly at celebrities while approaching them with fake poo, or a phallic-shaped microphone.

Now a mother-of-one and in her early 40s, her humour has matured, if not mellowed; the fearlessness is still very much there. In fact, rather than “hiding behind characters”, she now has something important to say, and be funny about.

Lee’s new stand-up show, Olivia Lee: Losing Her Total F****** S**t LIVE, centres around “toxic femininity”. The concept of toxic masculinity, the problems men face from trying to live up to the traditional “tough” male stereotypes, has become fixed in today’s vocabulary; so why do we not hear so much about it the other way round, she wants to know.

Of course, feminine stereotypes are being challenged more than ever, not least with the #MeToo and Time’s Up movements in the past few years.

But faced with a torrent of mindfulness and positivity quotes directed at women on Instagram as she often struggled with motherhood, Lee says it is these ideals that she wanted to address.

“We’re told constantly to be positive and to be grateful. Well, where do we put our negativity?” she asks.

Lee is returning to stand-up after five years, a move she thought she would never make after having her son, who is now four.

Laying bare her thoughts on motherhood, sex and marriage after becoming a parent – and about sometimes wanting to put her newborn “in the bin” – the show is explicit, candid and very funny; but probably one she might want her little boy to avoid, at least for a few years.

Earlier this year, Lee released the album Mindful Mum – How Not To Lose Your Total F****** S**t, proudly bearing the parental advisory explicit content label thanks to its sweary antidote tracks to all the “worthy” meditation records out there to help mums.

“That was a reaction to me struggling with motherhood and the idea that you have to be a perfect mum,” she tells Sky News. “The idea of perfection that I felt men seem to be exempt from and women seem to be overloaded with. We’re supposed to do it all, have it all; only feed the kid organic food, take them to baby sensory. I just felt overwhelmed with it.

“So yeah, [the record] really helped me to release everything that I was feeling in terms of my frustrations and my feeling that I was failing. The whole idea behind the album was it was a mother’s guide to staying sane by embracing your angry inner self.”

As Lee wrote the album, she realised there was more she had to say.

“We’ve been fed subconscious messages, that [women’s] anger isn’t valid and that to me is what toxic femininity is, or part of toxic femininity. The idea that men get fed messages like they shouldn’t be vulnerable or they can’t cry, we’re starting to really dispel that and break that down. We’re very aware of it. But what is the female equivalent? We don’t hear about toxic femininity as much, do we?

“Femininity can often be a prison, especially when you are a new mum and you can’t keep up with the standards that maybe you had prior in terms of how you look or how you behave, because you’re knackered. So basically, it’s my homage to female anger and saying that I think it’s great and we need to embrace it and not be afraid of it.”

Lee has spent the morning “having a verbal fight” with her son, who is going through a phase where he refuses to get dressed, she says. “So by the time we got him off to nursery, I felt like I’d done a day’s work.”

Parenting can be “sh*t”, she happily admits. She says she wishes more women would.

“[The show and the album] is something to help other mums, because so many mums, I think, feel that by saying how s**t it is sometimes, it means they don’t love their child. The two for me are separate. You know, you can love your child more than anything else in the world, but say that parenting is really…”

The reaction, she says, has been “amazing”. It turns out positive social media memes and inspirational quotes aren’t for everyone.

“I think it’s quite timely because meditation and mindfulness seem so popular, it’s kind of everywhere. But there’s no version of it that has jokes in, or has inappropriate X-rated mantras. I think it’s a good time to do something a bit different in something that feels so popular…

“I really love it because I’m on stage talking about a subject that feels very close to my heart, very close to who I am. Because I am an angry bird. I’m a gobsh*te.”

Lee says she has been called “aggressive” her whole life.

“All of that. So this is finally my way of going: hang on a minute, let’s look at that. You know, why is it negative to be an assertive woman?

“An aggressive man, people go – I mean, look, he might not be very popular – but it’s like oh, he’s got something to say, take him seriously. Don’t p*ss him off. I think the minute a woman gets aggressive, we almost lose our power and I think there’s this real idea that we’re unstable or irrational or mad or a bit period-y, you know. In a way that men don’t get.

“I’m at the age now where I want to own it. I don’t want to minimise myself or apologise, you know, try to be more feminine or this idea of being ladylike. It’s exhausting.”

Lee doesn’t come across as the kind of woman who has felt pressure to rein herself in.

“Well, my mum’s very, very feminine and very ladylike and I think I definitely grew up being told that that was a big currency… to look good, to always look your best. I found that suffocating, actually, is the truth. Growing up, and the pressure of that.

“I definitely think we are waking up to how damaging that can be on the female psyche. But I struggled with that. And then even after having my baby, the pressure to lose the baby weight and bounce back into shape.

“It’s like, why? Why do we have to lose it so quickly? What? Why? What is this reward we give women for looking like they haven’t had a child and eradicating every bit of evidence that they’ve had a child, instantly? You know, where’s that coming from, why’s that good for us?”

It’s all quite far removed from her early days in comedy, a woman who turned up on red carpets to annoy celebrities.

You may well remember wincing at Lee’s audacity on prank show Balls Of Steel in the mid-2000s, which led to her own shows, Olivia Lee’s Naughty Bits and Olivia Lee: Dirty, Sexy, Funny. From unsuspecting members of the public to celebrities including Anthony Costa, David Furnish and even Jennifer Lopez, no one was safe. (Furnish called Lee a “horrible woman”).

She was then asked to appear on The Tonight Show With Jay Leno in the US, writing her own comedy for several appearances in 2010.

“Oh it was really good fun,” she says of her pranking days. “I mean it was my first job in telly, in your 20s and you’re getting paid to behave badly and be naughty. It was brilliant. But I look back at it now and I don’t know if I could do some of that stuff now; kind of as a mum, you’re like, oh, I don’t know about that.

“I just think your humour changes. Hmm, I’m in my 40s, I’m not sure I need to be putting fake poo on my hand and taking someone’s hand; is that, like, good enough, in your 40s?

“I think when you’re in your 20s, you’re like, oh yeah it’s really funny, but your taste changes as you get older. And for most of my career I’ve hidden behind characters and I’ve done silly pranks and I feel like this is the first time I’ve actually got something I really want to say that I feel very passionate about.

“I’m actually saying it rather than hiding behind characters. It’s quite scary, but in a good way.”

Still, though, she is unafraid to speak her mind.

“It seems in the moment that I’m kind of devoid of that embarrassment gene. Or [I’m] just, I don’t know… maybe not very bright?”

She laughs. “I don’t know what it is. I’m just in my own world. I do watch my friends and other people I know who seem very, very bothered about what other people think of them. I think that can be a negative.

There is one person she cares about, though, who won’t be going to see the show, for as long as she can put him off.

“I don’t think he’s allowed, I’m not sure it would be good for our relationship,” she laughs, addressing the idea of him watching her show.

“He wants to see it… I haven’t let him yet… yeah. You know, [I’m] kinda like brushing it under the carpet. ‘Yeah, maybe come in the spring. In the summer.’ I’ll see how long I can keep fobbing him off.

“I talk about our relationship a lot. And that’s why I’m just like, ‘you’re not coming’.