Home Culture Robert Carlyle: ‘Could I be prime minister? I can’t think of anything... 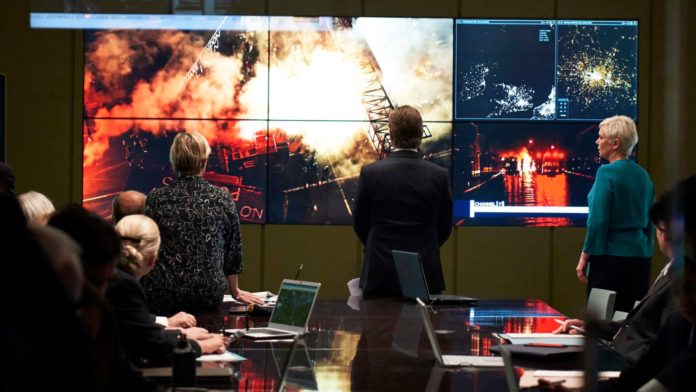 Actor Robert Carlyle has said he “can’t think of anything worse” than being responsible for running the country, ahead of the release of his new show set in the heart of government as a national crisis develops.

Best known for his roles in Trainspotting and The Full Monty, Carlyle will soon be seen on screen as charismatic Conservative prime minister Robert Sutherland in new Sky One drama COBRA.

Perhaps an unusual choice for the role, the actor, who grew up in Glasgow, told Sky News and other journalists ahead of the start of the series he does not believe anyone with as strong an accent as his would ever make it into the corridors of power.

A Scottish Conservative prime minister in real life, he says, would be “about as likely as a unicorn”.

“I can’t sound like this [to play a prime minister], there’s no way. I don’t think that someone that sounded like this would even become a member of the Conservative Party, but certainly if he was, he wouldn’t be put in the front, the top job.”

Carlyle says that while keeping something of Scottish accent to play Sutherland, he has adopted a more neutral tone.

“[The role] gave me various problems in the research of it and the playing of it, and particularly the way that he sounds,” he said. “There’s a kind of tone that I tried to get with the prime minister, which I think hopefully is reminiscent of… I can only describe it as like Scottish rugby players. They sound kind of vaguely Scottish. So that’s what I was trying to go for there. Because of course you couldn’t sound like this.”

COBRA refers to the Cabinet Office Briefing Rooms, the crisis rooms where Britain’s leading experts and most senior politicians meet to steer the country during times of emergency – and not a snake, as Carlyle originally thought.

In the scenario played out in this six-part series, written by Ben Richards (Spooks, Strike: The Cuckoo’s Calling), the disaster is a geomagnetic storm resulting from a solar flare. The first episode opens with a plane falling from the sky, and London’s glittering night-time skyline plunging into inky blackness.

Carlyle, who moved to Canada with his family about 10 years ago, says living there he has become more aware of the possibilities of natural disasters.

“Because I live in Vancouver now, there’s warnings of earthquakes and tsunamis and stuff like that.

“At first when I went there I thought, yeah, yeah, yeah. But you begin to… with children, you think Jesus, what if that does actually happen? And then the kids come home from school saying they go through earthquake drills and stuff like this.

“So it’s not exactly sleepless nights but you’re aware of it, you’re aware if there was a kind of catastrophe or disaster, you know, what’s your first port of call? What would you do? What’s the first thing you would do?”

Carlyle, Hamilton and Haig, who are also speaking ahead of the show’s release, all agree the first thing most people would do if they knew they possibly didn’t have long left is find their friends and family.

“I think that environmentally now there’s a sense of all those natural disasters getting closer and closer, you know?” she says. “Australia at the moment… flooding in this country. It feels like it’s encroaching, that something is going to happen soon, to everybody. You just don’t know where or when it’s going to hit.”

“I had a meal with a very senior virologist recently,” says Haig. “As you do. Who said that they all believe that we are miraculously lucky not to have suffered a huge pandemic so far in society…

“Swine flu we sort of got away with it and it turned out to be less dangerous then they’d first foreseen. But he was absolutely convinced that that was going to be a big problem, at some point.”

Speaking about why, as viewers, so many of us are drawn to films and shows about disasters, Hamilton says they are “a way of people living out their fears” without actually going through the ordeal.

“I’ve never been someone who pays to go to a horror movie,” she says. “I’ve never paid to be terrified, I just don’t have that impulse in me, but I know that a lot of people do and I think that’s what that is.

“It’s terror in the knowledge that you’re safe. It’s the sort of rehearsal for the thing and I think people love it.”

There has already been talk of a second series, before the first is even out. While another natural disaster is probably off the cards, could another series tackle the political disaster of Brexit?

“I think [Brexit] is as big a disaster, really, this is a disaster in my opinion,” says Carlyle. “I don’t know. I mean it would be up to [writer] Ben of course and the powers that be, to dictate how it is going to go. That’s always been my thing, that’s always been my question. How could this happen again, what would you do?”

Being on a Downing Street set, he says, even if not the real thing, “was one of those things you do in your life and you career and you put a little marker down”.

Carlyle, who met Tony Blair during his time at Number 10 in the late 1990s, said he did not meet with any prime ministers, past or present, to specifically help him prepare for this role.

“It’s kind of weird when you meet people like that,” he says. “I was fortunate enough to have met the Queen a couple of times and that’s bizarre when you’re in the company of someone like that, because you, think, ah, I’ll be fine…”

But it does affect you, he says. “You’re like, sh*t, that’s the Queen. You can’t help but think that.”

Speaking about Mr Blair and his air of authority, he says he believes it is often others who project that “electricity” on to politicians, or anyone in the public eye.

“I think actors witness that sometimes, when people come to you in the street and stuff like that, and they give you this thing, there’s this thing that happens, this kind of electricity thing, and it’s nothing to do with you, it’s all coming from them. But they would then say, ‘oh, I met him and he was like this’… It’s like, you weren’t.

“They give it up to you. So, yeah, [Blair] certainly had that. But whether that was me giving him that is probably more…”

Now that he’s played the role, would he fancy taking on the top job?

“I can’t think of anything worse… No, that’s the last thing I’d want.”

Watch our full interview with Robert Carlyle on Sky News and Sky News online on 17 January, ahead of all episodes of Sky original COBRA airing on Sky One and NOW TV at 9pm

Cloris Leachman knows just how to serve it up

‘I’m exactly where I need to be’: Pamela Anderson marries her bodyguard