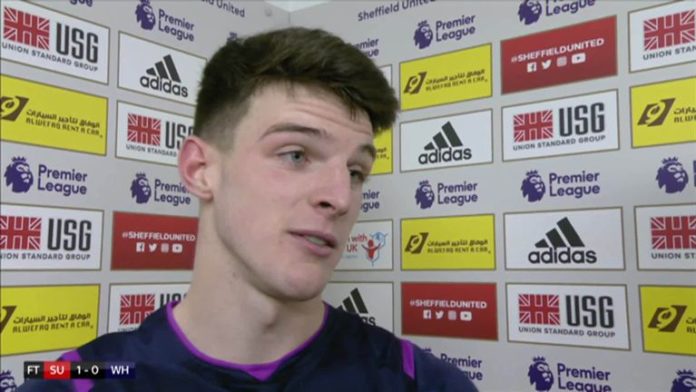 Rice: “It’s not just the thoughts from me, it’s the thoughts of every Premier League player, pretty much everyone doesn’t want VAR in the game”

Jamie Carragher called the handball rule that disallowed Robert Snodgrass’ equaliser “a joke”, while Declan Rice has called for VAR to be scrapped.

However, there was late controversy as Snodgrass looked to have rescued a point in stoppage time but VAR ruled the goal out as the ball had been headed against Rice’s arm in the build-up.

“It’s not just the thoughts from me, it’s the thoughts of every Premier League player, pretty much everyone doesn’t want VAR in the game. There have been so many crazy decisions. Sometimes it works but you see fans celebrating VAR like it’s a goal – football shouldn’t be like that. The emotions the West Ham fans showed when we equalised was real emotion. We’re all not happy with it but it’s in the game now so we’ve got to get on with it.”

The handball rule states that if a player gains control/possession of the ball after it has touched their hand/arm and then scores, or creates a goal-scoring opportunity then a free-kick will be awarded. It’s a law that needs to be changed, according to Carragher.

“The handball rule now is a joke – an absolute joke,” he said.

“There’s no way goals like that should not be given. We talk about VAR but the rules on handball have to change. It’s embarrassing that isn’t given as a goal. No one knows inside the stadium what’s gone on. There was no intention from Rice. I can understand if the ball goes in the net off the arm. Everyone at home will be shaking their heads, apart from Sheffield United fans.”

Wilder: I feel for West Ham

Sheffield United boss Chris Wilder has seen seven VAR decisions go against his side this season, as opposed to only one in their favour. He had sympathy for his opposite number David Moyes.

“I feel for David and the players,” said Wilder. “The same thing has happened to us a few times. But we would’ve been devastated if we’d have drawn that game.

“As soon as they scored, no one was looking at it (a possible handball) but I felt for the opposition – it’s the same moans and groans as we’ve had in the past.”