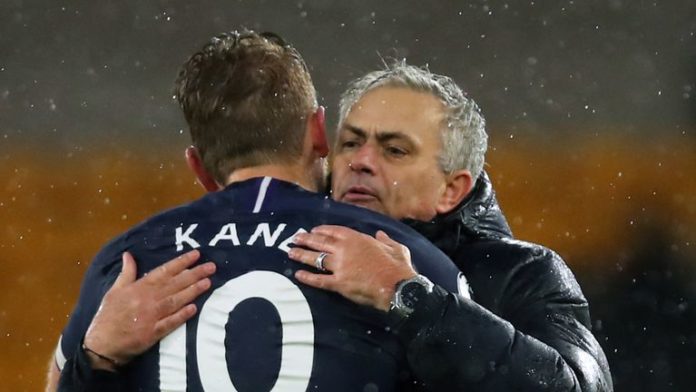 Jose Mourinho admits Tottenham will never be the “transfer window king” as he looks to strengthen the squad before the end of the month.

Spurs have held talks with AC Milan about signing Krzysztof Piatek after Harry Kane was ruled out until April following surgery on a ruptured tendon in his left hamstring.

They are also considering signing a midfielder on loan this month after Moussa Sissoko was ruled out for three months with a knee injury.

But speaking ahead of Saturday’s game against Liverpool, live on Sky Sports, Mourinho suggested it could take several windows to build the squad he ultimately wants.

“I give one example,” he said. “If you need a goalkeeper and you go to one of the top three goalkeepers in the world, you resolve the goalkeeper problem in one transfer window. I’m speaking about Allison.

“How many windows they needed to resolve that? One. Depends on the situation.

Mourinho was asked to compare the current situation at Spurs with his first transfer window at Chelsea when funds under Roman Abramovich appeared to be limitless.

“That was quite simple in the sense of ‘which one is the central defender that you want?’ ‘That one – thank you very much’,” he added.

“It is a different challenge and you should look to it in a different way. For me it is very enjoyable. I come to the club so happy to come, one of the reasons why I was so happy was because everything was crystal clear.

“Nothing was promised to me that in this moment I say ‘that is not the truth or I am very disappointed with it’.

“What the club promised me they are giving me and what I promised I am giving too.”

So would Mourinho gamble on buying a striker he did not know?

“No gamble,” he replied.

“The group doesn’t need a lift. In that perspective, no. The group is good. The guys are good guys, they like to work.

“The desire of every team, and we are not different, is to improve. The best way to improve on the long term is to do something now, something in the summer with more options. Do we try to do now to try to help the team until the end of the season or not?

“We have to be calm and patient. Instead of us chasing the market let’s see what happens in the market and see if the market decides to knock on our door. I think it is better that way.”