Home Sport Aubameyang sent off as Arsenal held at Palace 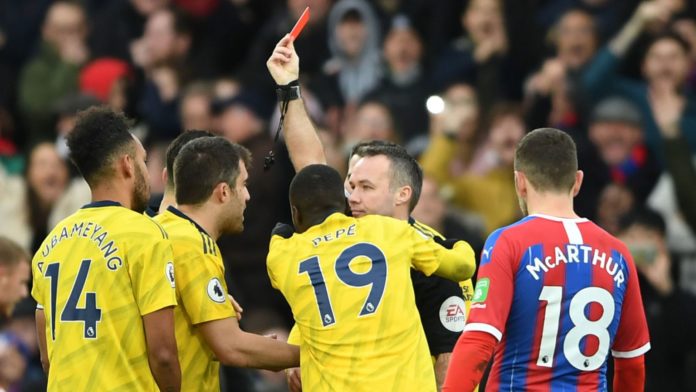 Arsenal had goalscorer and captain Pierre-Emerick Aubameyang sent off by the Video Assistant Referee (VAR) as they were held to a 1-1 draw by Crystal Palace at Selhurst Park.

Arsenal took a 12th-minute lead when Aubameyang finished off a fine 18-pass move with his 16th goal of the season in all competitions.

However, the home team hit back nine minutes after half-time through Jordan Ayew’s deflected effort, before Arsenal were reduced to ten men when the VAR intervened to send off Aubameyang for a dangerous tackle midway through the second half.

In a frantic finale, ten-man Arsenal hit the post while Palace had a shot cleared off the line. After the match, Aubameyang – who will now serve a three-match ban – apologised for his actions.

Man of the match: Jordan Ayew

The visitors took no time hitting their stride as Palace – who began with new loanee Cenk Tosun on the bench – unwisely opted to stand off their London rivals in the early stages, with Arsenal opening the scoring with an exquisite goal.

The move began with David Luiz firing the ball into the path of Mesut Ozil, who in turn fed Alexandre Lacazette just outside the area. The Frenchman then picked out his strike partner in the box, with Aubameyang making no mistake from 10 yards for his 11th goal in his last 17 London derbies.

The match turned on its head after half-time, though, as Palace woke from their first-half slumber and, roared on by the home faithful, drew level after 54 minutes with a fortuitous strike.

James McCarthy was played in down the right and after Arsenal failed to clear the Irishman’s low centre, the ball fell to Ayew, with the striker’s shot somehow looped into the net with the aid of a deflection off Luiz’s outstretched leg.

Things then from bad to worse for the visitors when Aubameyang saw red for a dangerous studs-up tackle on Max Meyer on the touchline, but only after the VAR decided to upgrade Paul Tierney’s original yellow card.

Palace made two changes, with Gary Cahill back in the heart of their defence, while Cheikhou Kouyate replaced suspended skipper Luka Milivojevic. But Cenk Tosun – who joined on loan from Everton on Friday, had to settle for a place on the subs’ bench.

Meanwhile, Arsenal were unchanged from their last league outing, with Pierre-Emerick Aubameyang captaining the side.

Both teams had chances to win it in a breathtaking final quarter, but first Sokratis was on hand to acrobatically clear James Tomkins’s header off the line, and then Vicente Guaita did brilliantly to turn Nicolas Pepe’s low drive on to the post, before reacting impressively to smother the rebound from Lacazette.

Arsenal manager Mikel Arteta said: “I think the first 35 minutes were exactly what I want our Arsenal team to play like. We were at it, we were very dominant, we controlled the game, we were in the right positions and we were so good in transition.

“After that we had a spell when we started to give free-kicks away, it’s more stop-start, but I was really pleased with the first half. The first ten minutes of the second half, credit to them because they pushed, put balls in the box and throw men up front, we had more difficulties.

“We conceded a goal where we switched off completely and it’s unacceptable, I am upset with that, but after that we reacted very well after conceding goal and after Auba’s red card, we were the team that I expected because everyone was at it again.”

Man of the Match – Jordan Ayew

The home side have struggled for goals all season long, which makes Ayew’s fifth strike of the campaign all the more vital.

However, while Ayew’s equaliser may have had a large slice of luck about it, it was the least the forward deserved after yet another tireless display in attack for Palace.

And it was maybe the presence of Turkey international frontman Cenk Tosun – who only arrived on loan from Everton on Friday – on the substitutes’ bench that spurred Ayew on.

Palace take on Premier League champions Man City at the Etihad next Saturday afternoon, while Arsenal face Sheffield United at the Emirates (both 3pm).