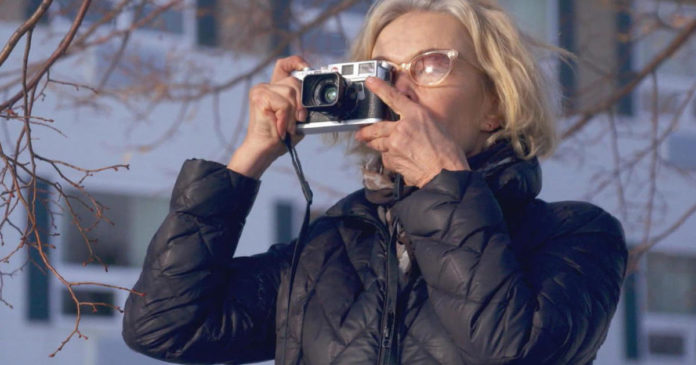 On a bracing January morning along the shore of Lake Superior, a photographer discretely moves in to find her shot.

“CBS This Morning” co-host Anthony Mason asked her, “Is it difficult for you to be undercover effectively on the street?”

“Not in a lot of the places I go, no!” laughed Jessica Lange.

Since her big break back in the 1970s, the actress has won two Academy Awards, and is currently appearing in the Netflix series “The Politician.” But just as enduring as her acting career is Lange’s attachment to her Midwestern hometown. It’s the latest inspiration for one of her other great passions: Capturing the world in powerful photos.

Lange likes to shoot around Duluth, Minnesota: “It’s the one place that has remained constant in my life,” she said. “After living all over world and traveling everywhere I’ve wanted to go, I keep coming back here.”

It was the starting point for her latest book of photographs, called “Highway 61.”

One of her subjects: An abandoned cement structure in the lake called “The Ice House” (left). “In the summers, it’s like a raft, you know? It’s out there and the kids swim out there. And they dive off. And it’s hard to believe right now, when we’re standing here in 25 degrees!”

Highway 61 runs right through Duluth. The road also crosses Cloquet, Minn., the town where Lange was born. “It was my way outta town, it was my way back. it has a lot of resonance to me.”

This girl from the north country went off to the University of Minnesota on an art scholarship in 1968. “I couldn’t get the painting class I wanted. So, to fulfill requirements, credits, I signed up for a photography class, where I met a couple of really charming young men and ran off to Europe with them.”

“Apart from an adventure to Europe, what did you get out of that photography class?” asked Mason.

“I didn’t stay in it long enough to get much out of it,” she said. “Although I did love the hours in the dark room, I have to say. You put the paper in the developer and suddenly this image starts kind of mysteriously, magically coming up out of the paper. And, I don’t know, it still thrills me.”

But it was awhile before she started taking pictures. That adventure in Europe later led her to New York, where she was cast in “King Kong” (1976), launching a long and illustrious movie career.

Mason said, “So interesting when you look back at those and you realize, well, if I’d gone left instead of right…”

“If I’d gotten that painting class, I still might be in Minnesota. Who knows?” she laughed.

“What prompted you finally to pick up a camera?”

“I think it was when my children were little. And I thought, I want to document this not just with snapshots and Kodak. And so, I taught myself really. It was one of those things that immediately felt necessary in my life.”

“Why do you think it gave you that feeling?”

“It was such a perfect antidote to being an actor and being observed and being photographed and filmed and watched and judged. Suddenly, I could become completely anonymous behind the camera.”

The Minnesotan moved to New Orleans for a time … “And then what connected it was, of course, Highway 61. So, I started driving it.”

Highway 61, which runs 1,600 miles through eight states down the center of the country, has long inspired artists, from bluesman Roosevelt Sykes to that other Minnesotan, Bob Dylan.

“I would drive through small towns, and stop the car and get out and spend an afternoon,” she said.

“You shot in a lot of streets like this for the book.”

Many of her “Highway 61” photographs are now on exhibit at the Howard Greenberg Gallery in New York, like the one titled “Cherry Chill,” taken on a hot summer day in an amusement park. “And suddenly out of nowhere these two little angels just plopped down. They were just in this kind of sensual fatigue of the heat of the day. And it just, I mean it’s one of my favorite photographs.”

On opening night, the gallery was packed with fans and actor friends, like Susan Sarandon, there to celebrate Jessica Lange, the photographer

Lange said, “What I love about photography is that it makes you really look at things, where you wouldn’t normally pay attention to things.”

“It’s very intimate in so many ways, you know?” Mason said.

“Yes, it is. For me, I think it’s emotional more than anything else. It’s an instantaneous emotional reaction to a moment. I just shoot when I feel like shooting, and what I like to shoot. And yeah, it’s a great gift.”