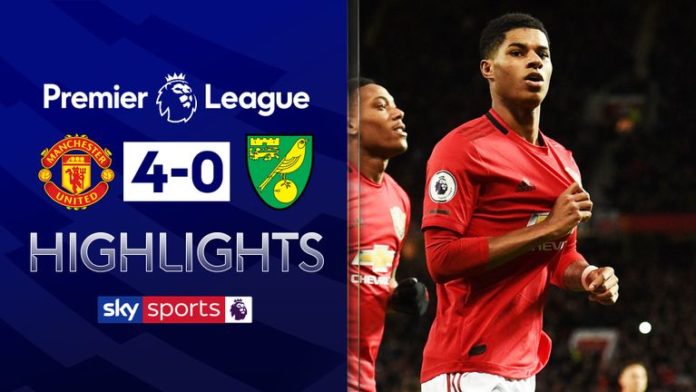 Ole Gunnar Solskjaer says Manchester United must “stay together” after fans sang anti-Ed Woodward and Glazer family songs in their 4-0 win over Norwich.

Solskjaer, whose side won on Saturday thanks to goals from Marcus Rashford (2), Anthony Martial and Mason Greenwood, admitted he heard the chants from the Old Trafford crowd, who have long criticised executive vice-chairman Woodward for his running of the club.

The Norwegian also insisted he has big backing from Woodward and the board regarding transfers, having spent around £140m in the summer, but will only buy if the player and value is right.

Asked about the chants, Solskjaer said: “I’m not sure if the players will get it but I noticed,” he said. “As a club, we’ve got to stick together, we’ve got to be united, we are a family.

“We are in all competitions. We are still in the Carabao Cup, the FA Cup, we’re fifth in the league, still challenging. We’ve improved the position from last season, we’ve got Europa League. They [the supporters] have just got to believe me when I say I feel we are doing loads of good things behind the scenes.”

He also told Sky Sports: “You know, I’ve really got the backing from the owners, from Ed. They know, and I know, that we have resources, if the right one becomes available, if for the right money.

“They’ve been so good with me, so for me it might happen, it might not, it depends if we find the one for the right value, but the backing is there.”

Regarding the game, Solskjaer was delighted with United’s attitude during the thumping win, and insists the work being done behind the scenes is fantastic.

“[I’m] very, very happy with everything. Attitude, work-rate. When the opposition manager can sit back and think: ‘Wow, that Manchester United side do work.’ We were still working, working and pressing, at 3-0 and 4-0. That’s what I want from my team. I want to see that attitude every game.

“We just keep carrying on, keep calm, keep improving and looking at the next game. We keep working behind the scenes, and the work being done is fantastic. The lads have a great attitude towards it.”

Solskjaer was also full of praise for Rashford, who scored twice on his 200th United appearance. The 22-year-old has scored 19 goals in all competitions this season – only Raheem Sterling (20) has more among Premier League players.

“He’s been exceptional, and to get to that stage, at the age he is now, is fantastic., He is a leader in the group. He keeps producing, scoring goals, and the way he was so calm with his penalty.”

United now host Wolves in the FA Cup third-round replay on Wednesday at 7.45pm, before going to Liverpool on Super Sunday, live on Sky Sports Premier League at 4.30pm. Norwich host Bournemouth at 3pm on Saturday in the Premier League.