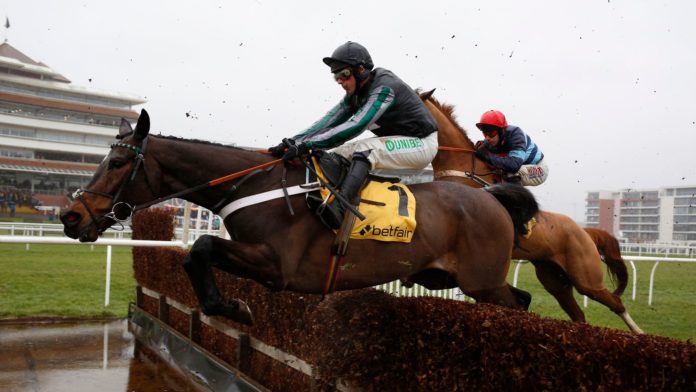 Nicky Henderson has hit out at the British Horseracing Authority over its handling of the Altior affair earlier this week.

The 10-year-old had been entered for Saturday’s Silviniaco Conti Chase at Kempton, but Henderson ruled him out of the Grade Two contest on Tuesday via a tweet from his Seven Barrows account.

However, BHA officials issued a statement on Wednesday evening, calling on Henderson to clarify his position on the reigning two-mile chase champion in what it called the “interests of fairness and transparency”, as Altior was still entered in the Kempton race and had not yet been scratched.

The BHA also sent a veterinary surgeon to examine Altior at Henderson’s yard on Thursday, with the trainer officially scratching the horse at 12.27 that day.

Henderson insists he informed the BHA of a possible issue before the news of Altior’s absence was tweeted on Tuesday and described himself as “furious with the whole thing”.

Speaking at Kempton, he said: “Can I come back to Altior next week as I’ve had a week of him. I love him to bits, but I don’t want to speculate what we are going to do now.

“When anybody says I’ve not been forthcoming, at quarter to nine that Tuesday morning I rang the BHA and told them – then everybody is knocking me.

“I couldn’t be public until I talked to the owner and I think that is only fair game. I couldn’t go public so I rang the BHA.

“Have they ever mentioned that? I’ve been furious with the whole thing. Who is getting shot the whole time through?”

Henderson thinks “a lot of things have been said and written” without all the information needed to make a judgement.

He added: “On the Tuesday morning, me and Nico (de Boinville) looked at him and we took a view that we decided we weren’t going to do what we had planned for him.

“Why couldn’t the BHA have mentioned that in all these statements that came out of there?

“If you say you are not going to run, there is a requirement you scratch the horse, but I said we are still in the race and I reserve my judgement.

“We thought he looked better the next day. A veterinary officer came to see him and agreed he looked sound.

“The only good bit of news is on that ground today, I probably wouldn’t have run him.”

The BHA confirmed Henderson had been in contact on Tuesday, but insisted its statement on Wednesday was an “entirely separate issue”.

A spokesperson said: “We can confirm that Mr Henderson contacted us on Tuesday morning.

“It would not be standard practice for the BHA to proactively make public the details of confidential conversations with a trainer, particularly if those conversations related to the potential use of inside information.

“Mr Henderson’s call was to let us know that he was concerned about why the horse was drifting in the market despite no decision having been made about his participation.

“The BHA was in regular contact with Mr Henderson from Tuesday morning onwards in relation to this, but the communication of a horse’s running plans is a matter for the trainer.

“This, however, is an entirely separate issue to our statement on Wednesday evening, which was instead related to the fact that Mr Henderson had not yet scratched the horse despite having said on Tuesday that it was not going to run and designed to keep the racing and betting public up to date.”